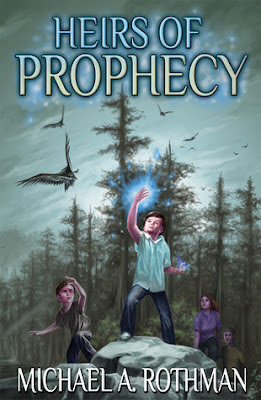 The Riverton family had been enjoying a simple summer vacation when, through a fluke of nature, they found themselves in a strange new land. The Riverton brothers quickly realize that in this world, they have gained unusual powers. Powers that their parents fear will attract the attention of Azazel himself - the merciless wizard who brutally controls this world.

The two brothers soon learn that an ancient prophecy has finally been initiated by their arrival in Trimoria. As the heirs of this prophecy, they are destined to lead the armies of men, dwarves, elves, and even a misfit ogre against the prophesied demon horde.Only one thing stands in their way. The evil wizard who has learned of their presence, and has sent assassins to wipe them from existence. -quoted from Goodreads

For the Riverton family, a fun summer vacation to AZ sounded like the perfect retreat from their beautiful home in the Pacific Northwest. Little did they know their trip would forever change their lives, as they are transported to a magical land unlike anything they ever imagined. It's here upon their arrival in a land full of magic, mythical beings, and danger do they learn their boys's arrivals had long been foretold in an ancient prophecy. In fulfilling their destiny, Aaron and Ryan both inherit strong magical abilities. In land where those who possess magic are banned/killed, both boys learn to grow up fast and quickly learn how to harness their new found abilities.

I really enjoyed the fantasy element of this book, and the adventure this family goes on. While this story follows the brothers, I liked that the story focused on the family and their new friends. I love that strong family bond that the Riverton's have, and how they're all in this together. The boys themselves are fun characters to read about, and I liked how they both embrace their difference, as well and learn to work together. Another think I liked about this book is the fact this story spans the course of two years, leading up into the second book in this series. There's also a cast of lively characters whom I enjoyed meeting as well.

What I had a hard time with is the story's pacing, and the length of the book. Don't get me wrong, I love a big book, but I feel that any book, whether it's fantasy, adventure, romance etc. is over 200 pages it needs to keep a good pace in order for the reader me to stay engaged with the story line. This book being 369 pages lost my interest a few times. There were times I felt the pacing was very slow, and other times I felt there were a few too many overly descriptive scenes that took me out of the story, vs keeping me hooked with it. I appreciated what the author was trying to do, but for me personally it didn't hook me enough to love the story, though overall I felt like it was still a good read.

If you're looking for a good, clean cut fantasy loaded with adventure, a close knit family, magic and a touch of romance I'd recommend picking this book up. 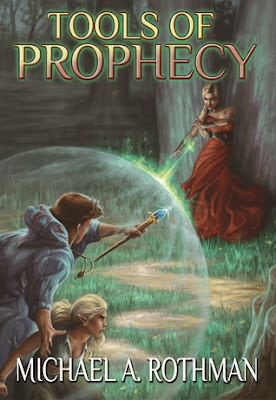 By: Michael A. Rothman
Published by: M&S Publishing

Released on: August 1st, 2012
Source: book from author/publisher to review/blog tour
Ages: 10 & up
3 Stars: It's A Good Read
Pre-Order from: Amazon | Barnes & Noble

The TOOLS OF PROPHECY is the second volume in an epic saga which describes a prophecy that has placed the Riverton brothers in the lead roles of a struggle to save their world from being overrun by unspeakable horrors. This destiny requires that they face off with the demons that nearly destroyed their world over five centuries ago.

In the first book, the population of wizards had been practically eradicated by the former tyrant. The Rivertons are now charged with creating an Academy of Magic, recruiting qualified students, and furthering their own training with secrets that have long been held by the reclusive elves.

Despite their youth, a mysterious spirit has engaged them in an epic struggle to gain mastery of their newfound skills, help raise and train two armies, and stay alive long enough for their final showdown with destiny.

Picking up right where Heirs of Prophecy left off, Michael Rothman whisks readers right back into the Riverton's brother's world of magic, danger, suspense and adventure. Much of what I enjoyed with book one rings true with book two. The brothers are older teens, a bit more mature and very skilled in the ways of their new home, and in harnessing their unique powers. They're still young and still have a lot to learn, but I liked seeing how much they're grown and continue to grow and learn as the series continues. I love it when a series picks up right where the previous book leaves off, and cuts right to the chase with what's going on. Michael does a fabulous job at recapping some of the first book's events,  and does so without spending doing so. It just enough to re-engage the reader incase they've forgotten what has happened previously.

In book one, more time was spent setting up the world, explaining the prophecy, and introducing the reader to the wide range of characters. In this book, more time was spent on the story itself, and I liked how the two books compliment each other in their progression in the over all story line. I also liked the direction this story goes in. It's a little bit darker, as there's more danger, and a lot more at stake with the epic battle that's about to take place. I liked seeing how each character has grown and continues to mature as this storyline goes on. The adults all change is ways I would except them to and the younger characters have all grown in ways I hoped they would. There's not one character in this book I enjoy over the other, as they each have important roles in telling this story. Normally I gravitate to one character, but with this series I've enjoyed reading about each of them, both good and bad. The other thing I liked was the romance that continues to grow. It's a little more mature, but still very much still a clean cut and age appropriate one.

Like Heirs of Prophecy, there were times the pacing and length of this book made it hard for met to stay invested with the storyline the entire time, but overall I liked the direction of the story and what takes place. There's plenty of action, a few twists, and some evil plots that are revealed that made this story an exciting one. Along with the action, there's a few new characters who get introduced into the series. With a cast full of wizards, elves, dragons, wolves, humans and more, this story's over all good vs evil battle just got a lot more exciting. Like book 1, if you're looking for a clean cut story that is full of fantasy, magic and adventure, I'd recommend picking this series up.