Today I'm excited to have author Matt Myklusch back on Mundie Kids to talk about his recent release, and final book in the Jack Blank Adventure series, The End of Infinity. Here's a little bit about his book: 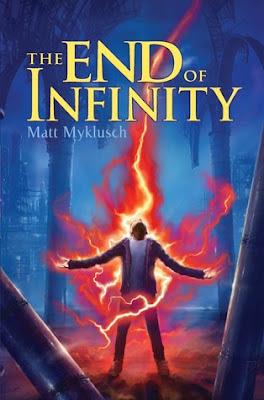 Jack Blank confronts his destiny in this action-packed conclusion to the trilogy Publishers Weekly calls a “no-holds-barred adventure.”Ever since Jack Blank learned that he came from the amazing country of the Imagine Nation, he’s known that his fate could go down two very different paths—he could either be the greatest hero the world has ever known, or its greatest villain.Now the final battle is here, and it’s time for Jack to discover the direction of his destiny.The action-packed trilogy concludes with more surprises, twists, and adventure than ever—along with the same humor and heart that has brought so many fans to Jack’s story - quoted from Goodreads

You can read my 5 star review here.

It feels like not long ago we had just talked about your debut book, and met Jack. Now we're here talking about the third and final book of Jack's adventures. From your first draft of Jack Blank to the end of The End of Infinity, what's one thing you've been most impressed about with Jack?

It's crazy that we're already at the end of the trilogy. Back when we sold the series, this moment seemed impossibly far away. What impressed me most about Jack is how much he grew over the course of all three books without ever sacrificing who he was. He goes down a pretty rough road, but at the end of it, his faith in himself pays off. He goes to war and becomes a true hero, but at the same time, remains a bright eyed, optimistic kid. He doesn't end up scarred and jaded by the experience. He makes it through (both physically and mentally) because he doesn't give up, period. And, when its over, he has grown, but he isn't a grown up. There's still lots more for him to learn and lots more for him to do. I'm glad I was able to take him through all this and leave the door open for more adventures.

You have a fabulous cast of supporting characters in this series, who have help Jack out tremendously. Do you have any plans on doing a spin off series with any of them?

I'd love that. I have lots of ideas for a SCHOOL OF THOUGHT spin off that dedicates a book to each of Jack's classmates and dives deeper into their story and their section of the city. I'd probably start with Skerren. I was really happy with how he grew as a character and how his relationship with Jack evolved over course of the books.  I'd do a book for Skerren, Allegra, Chi, Trea, Lorem, and then Jack again. I have lots of ideas for these guys, and I set up the Imagine Nation so that there could always be new stories coming out of it, but creatively, I feel like I have to switch gears right now. I'm working on something completely new and different, and I'm loving it. I hope to be able to make an announcement on the new book soon.

This series has a powerful message for kids, and I like how each book empowers it's readers in different way. What's the overall message you hope readers will take a way from Jack's stories?

The overall message is that your future is in your hands. Whenever I go to schools, I ask kids what they want to be when they grow up. I always get back all these great, aspirational career ideas from them. Doctor, Actor, Dancer, Astronaut, Professional Baseball Player, etc... These are the kind of things kids dream about, and all too often give up on, because other people tell them they are aiming too high. Their dream is out of reach. I think it is incredibly important that kids know not to let other people put a lid on their potential. Their only limit is their imagination, and if they believe in themselves, they can get there.

If you look at Jack, that's exactly what he had to deal with. He came from a place where people said he was going to be a toilet brush cleaner when he grew up. And, then when he got to the Imagine Nation, it didn't get any easier for him. Everyone thought he was going to be a villain that would destroy the world, but he didn't let that define him. He had his own ideas about the future, and that is what imagination is all about. It's about possibility... infinite possibility, and that exists in everyone reading these books. My advice to people is always to follow their dreams, and find their own Imagine Nation.

There's a great mix of adventure, action and humor in this book. What element has been the most fun to write about/create?

It's all fun to write, really. I know that seems like a cop out answer, but I like them all for different reasons. I love the action scenes because they are the only things that don't get planned out at all. I outline everything in the book, but for the fight scenes, the outline just reads "fight scene." I know what has to happen and where the story has to go, but I don't know the details of how I'm going to get there. Figuring out the beats of the action as I write it is great fun, and really satisfying when I can make it work.

A good example from THE END OF INFINITY would be the scene when the Rustov attack and Jack fights back with a little help from Empire City's train system. Hopefully, I'm not spoiling anything here, but it's a great explosive finish to a battle, and I had no idea that I was going to write it that way when I sat down. It's very cool to just feel out where things are going and follow your gut when writing, especially for a planner like me. And, the humor is part of that too. At the end of the fight, Jack and Allegra trade corny lines like, "this is what I call training hard," and "you don't mess with a superhero... in training." This goes on until Allegra tells Jack to stop because he is ruining the moment. I don't even know if anyone else finds that funny, but I find it funny. It feels like two friends busting each other's chops, and it feels real to me. Anytime I can make this crazy world of the Imagine Nation seem real, that's great. I love that.

If you were one of the heroes in your book, what super power would you have and why?

This might not help me save the world, but I would like the power to make my youngest son sleep past 6AM. I won't be much help defeating the Rustov with that power, but I would at least keep my sanity intact. Sleep deprivation is a form of torture, and my kids (who I love dearly) torture my wife and I mercilessly on that front.

That is a super power I wish I had when my kids were younger! Thank you so much for stopping by to visit w/ me today Matt! Congratulations on your newest release!

Connect with Matt via his: Website | Twitter |  Goodreads | listen to his live podcasts on The Other Side of the Story

Thank you to Matt, I have an awesome giveaway for 1 lucky follower! All three books from the Jack Blank series, an original artwork from Matt (see picture below), and a comic book (X-Men 275) from Matt's personal collection (that got him interested in writing/drawing again). 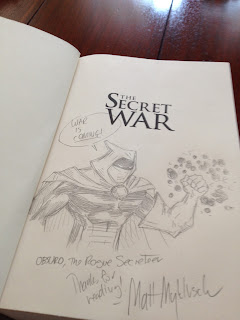 (This is a picture Matt drew in The Secret War of Obscuro, the Rogue Secreteer).

To enter, please fill out the form below:
a Rafflecopter giveaway