Book Trailer Reveal: Gabriel Stone and the Divinity of Valta

I'm thrilled to be teaming up with Month9Books to reveal debut middle grade author, Shannon Duffy's book trailer for her upcoming release GABRIEL STONE and the DIVINITY of VALTA. After you watch the trailer, you can find out more information about the book, the author and the publisher below in my post. ENJOY the trailer! 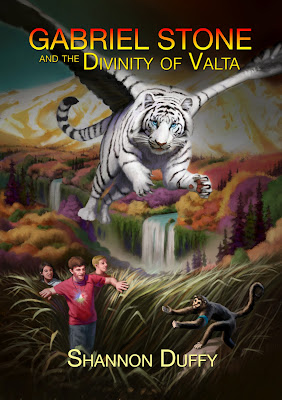 GABRIEL STONE AND THE DIVINITY OF VALTA Blurb:
Gabriel Stone is a magical, fast-paced story that takes readers on a journey they won't soon forget. It has enough mystery, intrigue, and wonder to keep readers up, lamp lit, and reading well into the night!
GABRIEL STONE AND THE DIVINITY OF VALTA Quote:
"Gabriel woke to Zigzag’s sloppy licking, and glanced at the clock on his nightstand. “Crap. Not again.” He pushed the three-year-old boxer away, sat up in bed, and gave his clock a tap. “Stupid piece of junk.” Today, of all days, his alarm clock had chosen to fail him. Again. It was the day Brent, Piper, and he found out if the waterfall crystal was more than just a crystal, if it was something really magical. Maybe it had been dropped from an alien ship, or something really cool." --Gabriel Stone and The Divinity of Valta
About the Author:
Shannon Duffy writes MG and YA. She grew up on the beautiful east coast of Canada and now lives in Ontario, Canada. Shannon is a mom of one boy, her angel. She loves writing, reading, working out, soccer, and the sport of champions-shopping.
Visit Shannon via her: Website | Twitter | Facebook | GoodReads
Via GoodReads: GABRIEL STONE AND THE DIVINITY OF VALTA

Speculative fiction is an umbrella term that encompasses the following genres:

Formed in 2011 by speculative fiction writer Georgia McBride (also founder of YALITCHAT.ORG and #yalitchat on twitter), each year, a portion of the proceeds from our anthologies will be donated to a charity we admire. We are NOT a charity publisher.

In addition to our charity anthologies, we seek to publish 9-11 additional titles annually.

We are distributed by Small Press United, a division of IPG.