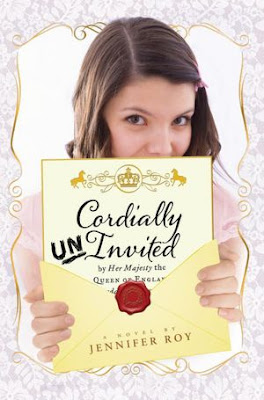 Synopsis: It’s The Princess Diaries meets Mean Girls when eleven-year-old Claire is invited to the royal wedding of the century!

Claire Gross, age eleven, might live in sleepy upstate New York, but she’s about to be a junior bridesmaid in the wedding of the century! Claire’s cousin Belle is engaged to the Prince of England, and Claire and her mom are heading to London for the royal ceremony.

Getting whisked away on a trans-Atlantic jet and thrown into a whirlwind of wedding activities would be a dream for any other girl, but Claire isn’t sure this is a match made in heaven. To make matters worse, another junior bridesmaid seems determined to sabotage the event! Can Claire put aside her own misgivings to save the day? What if there’s no such thing as happily ever after?

From award-winning author Jennifer Roy, this is a hilarious, heartfelt story about a girl who discovers that fairy tales may not exist, but sometimes there’s still a little magic to be found in real life.

My daughter and I both love royal weddings and yes, we enjoyed every minute of the pageantry as William and Kate walked down the aisle. So imagine our delight when we found this book. It gave us a glimpse into the tension and family/friend politics surrounding such an event.

My daughter, MundieTween, thought it was cool how a normal girl became the cousin of a princess and how she almost interrupted the wedding of the century. As a reader she didn't want to stop reading because she needed to know how it was going to end -- could it be disastrous? Do happily ever afters even exist? We both believed Claire feelings about happily ever afters because she'd never met her father. This detail set up the story beautifully and Jennifer wrote it in a funny, sweet way that left both of us laughing at the end.

I encourage parents and tweens, who want a story about a royal wedding and what it means to be family, to pick up this story. Both MundieTween and I are looking forward to more of Jennifer's middle grade books.
Posted by Sophie at 3:26 AM Labels: 2012 Middle Grade Releases, 5 stars, Book Review, Cordially Uninvited, Jennifer Roy, Simon and Schuster, Sophie