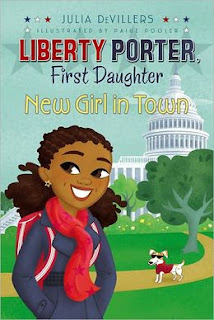 Synopsis: Liberty Porter is your average eight-year-old girl. Except for the fact that her dad is the newly-elected President of the United States. She just moved into her new house--the White House. And she's about to start at her new school. It’s hard being the new girl at school and Liberty’s first few days don’t go as smoothly as she’d like. Having to bring a bodyguard to school? Not cool. Answering a history question about her new home wrong? Really not cool. Not knowing if kids want to be her friend just because she’s the First Daughter. Totally not cool! But if anyone can turn “not cool” into something “cool” it’s Liberty the “coolest” first daughter ever! Join Liberty as she finds true friends, and navigates her way through the corridors of her new school and the White House.

First days of school can be very awkward when you're the New Girl. Imagine though, if you're not only the New Girl, but also the New First Daughter. Awkward time!

She's getting to know her new school as well as her new house -- umm, that just happens to be the White House. Both MundieTween and I loved reading how Liberty could go down to the chocolate shop in the White House and add chocolate to her lunch.

Liberty is quite a spunky, true-to-life character. While she takes a proper first day of school photo for the staff photographer, she's like most kids and makes a face when her dad (that's the PotUS) snaps a pic.

At school, Liberty finds life more awkward. During a field trip to the Smithsonian, she reflects on all the past presidents' portraits and the First Ladies' inauguration gowns. MundieTween and I enjoyed watching Liberty realize her own place in history. However reality isn't always full of reflective moments, it's full of this-can't-be-happening-to-me minutes, too. It doesn't matter that your family will play a significant role in U.S. history if you have to sit between your assigned Secret Service agent and the White House Head of Staff instead of by a new friend who asked you to sit by her.

Julia brings to life the moments of social awkwardness that most fourth graders experience in such a real way that my daughter and I found ourselves giggling over her predicaments. Another great story from Julia and yes, we're both looking forward to more.
Posted by Sophie at 3:46 AM Labels: 4.5 stars, Aladdin, Book Review, Julia DeVillers, Liberty Porter First Daughter New Girl in Town, Liberty Porter series, Paige Pooler, Sophie