Hello and welcome to my very belated edition of this week's Marvelous Middle Grade Monday. Today I'm thrilled to have Stephanie Burgis, author of the, The Kat Incorrigible Series on the blog today. Her final book in the Kat trilogy, Stolen Magic will be out stores on April 2nd, 2013, and is being published by Simon & Schuster Children's Books. I can not wait to read it. This is such an adorable series to read. 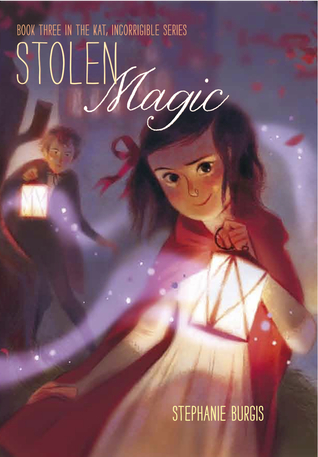 In this conclusion to the Regency-era fantasy trilogy Kirkus Reviews calls “enjoyable mayhem,” Kat is tasked with saving her family, the Order of the Guardians, and England itself.With just days to go before her sister Angeline’s long-delayed wedding to Frederick Carlyle, the impetuous Kat Stephenson has resigned herself to good behavior. But Kat’s initiation into the magical Order of the Guardians is fast approaching, and trouble seems to follow her everywhere.

First, Kat must contend with the wretched Mrs. Carlyle’s attempts to humiliate her sister; the arrival of the mysterious Marquise de Valmont, who bears suspicious resemblance to Kat’s late mother; and Frederick’s bewitching cousin Jane, who has Charles Stephenson tripping over his feet. But when a menacing boy with powerful magic starts hunting Kat, a dastardly villain tries to kill Angeline, and the Guardians face a magical robbery that could spell the end of their Order, propriety becomes the least of Kat’s concerns.Can Kat save her sister’s life, the Order of the Guardians, and England itself before it’s too late?


Turning Charles Into a Hero (With Kat’s Help)

When I sat down to write Stolen Magic, the third book in my Kat, Incorrigible trilogy, I knew only four things for sure: Kat was going to tangle with smugglers, have fabulous magical adventures, find out an earth-shaking secret about her (late) mother…and take charge of her hapless older brother’s love life!
…Which was really going to take some doing, after all of his screw-ups in the first two books. Charles, in his earlier years, was certainly not a romantic hero! After all, he’d been kicked out of university for too much drinking and gambling, and he’d nearly landed the whole family in debtor’s prison. What kind of hero is that?
Well, the truth is, he wasn’t a hero to begin with, in the first two books. But he grows into one, by the third. And I love Kat’s whole family, warts and all.
Kat’s oldest sister Elissa, whose romance took place in the first book (Kat, Incorrigible) seemed nearly saint-like in her sense of responsibility and social correctness…but that didn’t stop her from having a secret love of Gothic novels and a dangerous yen towards martyrdom. Their sister Angeline, whose star-crossed romance was a focus of the second book (Renegade Magic), is fiercely intelligent, witty and brave - but also dangerously hot-tempered, stubborn and prone to reckless decisions. And as for Charles…
Well, Charles has his own backstory that explains some of his own terrible decisions in the past, but his love for his sisters was never in doubt - especially by the end of Renegade Magic. And now that he’s had a chance to learn from his own mistakes (especially after his life-changing experience in Renegade Magic!), he’s resolved to finally become the man he always should have been.
But none of that prepares him to fall head over heels for a girl far, far out of his league in Stolen Magic…so it’s lucky that he has a little sister who’s never afraid of taking charge of her older siblings’ lives. ;)
(All for their own good, of course!)
Here’s one of my favorite scenes between them:
Sunlight glinted off the water, but my brother looked as grim as if he were staring into an abyss.
"What would be the point?" he said. "You heard what she told you. Any men who’ve ever gambled or drunk to excess are to be shunned. That’s what she thinks . . . and the worst of it is, she’s right. I don’t deserve to be anywhere near a girl like her, after all the things I’ve done. So what exactly would be the purpose of me trying to impress her?"
With his arms crossed and his blond hair glinting in the sunlight, he looked just like a poet, romantic and desperate and lost in the contemplation of his own sin.
I rolled my eyes in sheer disgust. "Oh, Lord," I said. "It’s no wonder you were suspended from Oxford so many times."
"I was," Charles said, "and I deserved it. That’s why—"
I overrode him ruthlessly. "That," I said, "is why it’s lucky you have me as a sister."
"I beg your pardon?" A look of panic replaced the brooding despair on my brother’s face. "Kat?" he said. His arms fell to his sides. "You aren’t planning any more of your wild schemes right now, are you? Kat? You wouldn’t—you couldn’t—"
"Don’t worry," I said, and reached up to pat his shoulder comfortingly. "I’ll take care of everything."

Thank you Stephanie for joining us today! You can read the 1st three chapters of Stolen Magic for FREE online at Stephanie's site here  http://www.stephanieburgis.com 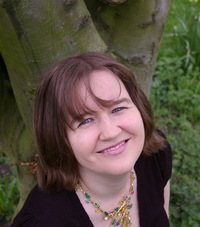 I grew up in America, but now I live in Wales with my husband, fellow writer Patrick Samphire, our son, "Mr Darcy", and our crazy-sweet border collie mix, Maya. My MG Regency fantasy trilogy is being published in the UK and North America, under different titles. My most recent book in the US & Canada is RENEGADE MAGIC (Kat Book 2) and my most recent book in the UK is A RECKLESS MAGICK (Kat Book 3, which will be published in North America next year). I've also published short stories for adults in a variety of magazines, anthologies, and podcasts.

Stolen Magic: Pre-Order it from Amazon | Barnes & Noble
Add it to Goodreads

The Giveaway:
To celebrate the upcoming release of her third and final book in The Kat Incorrigible Series, Stephanie is giving away a SIGNED copy of Stolen Magic. To enter, please fill out the form below.

13 comments:
Email ThisBlogThis!Share to TwitterShare to FacebookShare to Pinterest
Newer Posts Older Posts Home
Subscribe to: Posts (Atom)
I would be most content if my children grew up to be the kind of people who think decorating consists mostly of building enough bookshelves. ~ Anna Quindlen
Good children's literature appeals not only to
the child in the adult, but to the adult in the child.
~ Anonymous ~