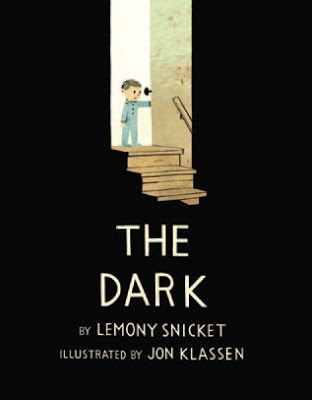 By: Lemony Snicket
Illustrated by: Jon Klassen
Published by: Little Brown
Released on: April 2nd, 2013
Source: book from publisher to review
5 Owlets: I LOVED It!
Purchase from: Amazon | Barnes &  Noble
Add it to Goodreads

This book is fabulous! I LOVED how the dark was it's own characters. Having read this to my kids whom are dealing with this same issue, they were able to see that the dark isn't as scary as they think it is. That's the message Lemony Snicket conveys in his brand new, fabulously illustrated, and well told children's book.

The Dark follows the story of young Laszlo who is afraid of the dark. One day Dark comes up staris when it's time for bed. The Dark leaves the basement during the night time, and comes to other parts of the house that he's not seen in during the day, including Laszlo's bedroom. That's when Laszlo takes his trek down to the basement, because dark asked him to. It's here that Dark helps Laszlo not be afarid anymore.

Thus begins Laszlo's journey on not being afraid of the dark, because he learns how to conquer is fear of the Dark, by learning what Dark is. I loved this book! Being a kid once I can relate to being freaked out of the dark, that was until I knew what was really there. That's the same thing I try to teach my kids. I loved the Lemony Snicket was able to conquer what I've been trying to teach my kids in one brilliantly told story. Not only is the story one most every kid can relate to, but the illustrations are great, and the story is lovely. It's not scary what so ever at all. I would highly recommend picking this one up. I'd recommend to ages all ages, but I think those maybe 4, but especially 5 and up will really identify with it.