Celebrating The Civil Rights Movement with Random House Kids: I Have A Dream by Dr. Martin Luther King Jr

Next week marks the 50th anniversary of Dr. Martin Luther King Jr's "I Have A Dream" speech. We, along with Random House want to reach out to our readers to encourage them to celebrate the Civil Rights movement by talking about a newly released book titled, "I Have a Dream" a picture book illustrated by Kadir Nelson. 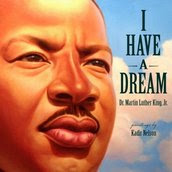 From Dr. Martin Luther King, Jr.'s daughter, Dr. Bernice A. King: “My father’s dream continues to live on from generation to generation, and this beautiful and powerful illustrated edition of his world-changing "I Have a Dream" speech brings his inspiring message of freedom, equality, and peace to the youngest among us—those who will one day carry his dream forward for everyone.”
On August 28, 1963, on the steps of the Lincoln Memorial during the March on Washington, Martin Luther King gave one of the most powerful and memorable speeches in our nation's history. His words, paired with Caldecott Honor winner Kadir Nelson's magnificent paintings, make for a picture book certain to be treasured by children and adults alike. The themes of equality and freedom for all are not only relevant today, 50 years later, but also provide young readers with an important introduction to our nation's past.

As a kid I remember reading and being taught about what Dr Martin Luther King Jr did. It wasn't until I was in college, when a class I took studied his "I Have a Dream" speech did I really appreciate all that he did. I remember sitting in that class, and being so moved by his speech. That feeling has never left me. As a parent, I love that now I can share Dr Martin Luther King Jr's speech with my children, and talk to them about how important this speech was, and still is.

The "I Have A Dream" book is a powerful read. This book not only allows young readers to read about Dr King's speech, it comes alive with Kadir Nelson's vivid illustration of Dr King, and various images taken from his speech. This book makes for one incredible read. This is a book I'm thrilled to have in my home. This book is a perfect fit for any school library, classroom library and in home library. Also included in this book is a CD with the official recording Dr King's speech.

I highly recommend picking this book up!


You can find out more about the book here, and watch a video of Kadir Nelson talking about the book, and his illustrations here:

I'm thrilled to be able to share an interview by Random House Children's Author, Shana Burg, who interviewed her father, who was at the march on Washington and heard Dr King's speech. Here's her interview with her father:

My father, Harvey Burg, was at the March on Washington. He stood only feet from the podium while Martin Luther King, Jr. delivered his famous “I Have a Dream” speech. My father was there because he was a civil rights worker, one of the thousands who gathered that day to demand the government dismantle the Jim Crow laws that enforced second-class citizenship on people of color. These laws kept buses, hospitals, schools, and cemeteries segregated and unequal.

This month, as we commemorate the fiftieth anniversary of the March on Washington, I sat down with my father to ask what it was like to be there:

First of all, Dad, why did you go to the March on Washington?

I was committed to the civil rights movement and to helping bring about equal treatment for all Americans under the law. This was to be a great demonstration and petition to the government. While the Kennedy Administration was sympathetic to civil rights, it was never the right time for them to proceed. But the leadership of the civil rights movement said there is no right time--the right time is now.
The civil rights movement was in full swing. We were all expecting that the March could lead to violence. Our frame of reference was the violence that had occurred throughout the South and particularly in Birmingham. I was twenty-two years old, when I volunteered to act as a marshal at the march. Typically, marshals are charged with helping maintain order and diffusing any tension between marchers, counter-demonstrators, and the police. I went to several training sessions, where I learned tactics of nonviolence.

Tell me about that day and what you remember most fifty years later.

It was a beautiful sunny and warm day. First, a few hundred people came. Then a few thousand. And then we were stunned--there were several hundred thousand people. I felt great! I knew that something very important was happening for the good of our country.

What did it feel like to be in the crowd?

There were 250,000 people from all over--people who had suffered under the Jim Crow laws, and other people working to oppose segregation. You could feel the love, the commitment, and the dedication of people who were standing up and petitioning the government for real change. Although primarily organized by the leadership of the African American community, a broad inter-racial and inter-religious coalition was built. The emotion in the crowd was palpable. It was electrifying.

What was on the official program that day?

There were many amazing speeches: March Director A. Philip Randolph; Student Nonviolent Coordinating Committee (SNCC) Chair John Lewis; Rabbi Joachim Prinz. Representatives of all the groups that were acting with tremendous courage in the South told their tales. I remember Mahalia Jackson singing You’ll Never Walk Alone.  They all seemed to set the stage for Martin Luther King, Jr.

What happened when Dr. King went to the podium?

He delivered the most incredible speech heard at the time. I was awed and mesmerized. He articulated everything I believed. The phrasing he used was so powerful--the simple statements like “...we will not be satisfied until justice rolls down like waters and righteousness like a mighty stream.” The speech placed the values I believed were at the heart of our great country in contrast to Jim Crow and the evils of segregation. When Dr. King said he dreamed of the day when his children “will not be judged by the color of their skin but by the content of their character,” that was the most electrifying moment of all.

How did participating in the March on Washington affect you?

That march motivated many people, including me. It inspired me to work in the civil rights movement in Alabama, first as a law student and field worker, and then as a civil rights lawyer. I felt part of a great movement whose mission was to end segregation and give the rights under the Constitution to all Americans.

Thanks for sharing your story today, Dad!