The Neptune Project by Polly Holyoke

Hello! I'm thrilled to be featuring Polly Holyoke's middle grade debut here on Mundie Kids today, The Nepture Project. I totally love this cover! I'm really looking forward to reading this book, which was release earlier this year in both the US and UK. Today Polly has given me an excerpt and the book's trailer to share with you. First, check out what this book is all about. 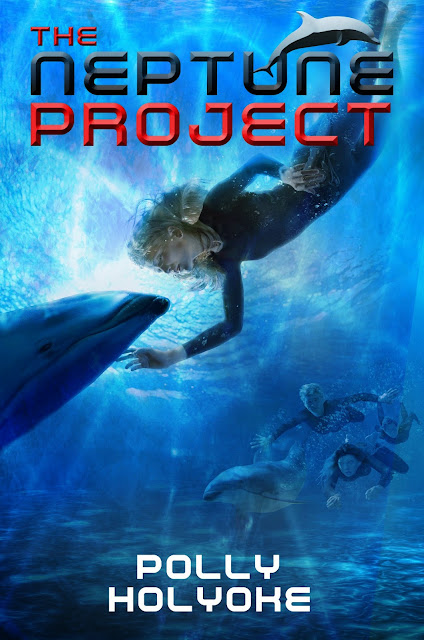 With her weak eyes and useless lungs that often leave her gasping for air, Nere feels more at home swimming with the dolphins her mother studies than she does hanging out with her classmates. Nere has never understood why she is so much more comfortable and confident in the water than on land until the day she learns the shocking truth—she is one of a group of kids who have been genetically altered to survive in the ocean. These products of the "Neptune Project" are supposed to build a better future under the waves, safe from the terrible famines and wars and that rock the surface world.But there are some big challenges ahead of her: no one ever asked Nere if she wanted to be part of a science experiment; the other Neptune kids aren't exactly the friendliest bunch, and in order to reach the safe haven of the new Neptune colony, Nere and her fellow mutates must swim across hundreds of miles of dangerous ocean, relying on their wits, their loyal dolphins and one another to evade terrifying undersea creatures and a government that will stop at nothing to capture the Neptune kids ... dead or alive.Fierce battle and daring escapes abound as Nere and her friend race to safety in this action-packed marine adventure.

Released in the US on May 13th from Disney Hyperion, you can find this book via Amazon | Barnes & Noble. Don't forget to add it to your Goodreads accounts.


This sounds like a fabulous read. Here's a sneak peak inside the book:


The Neptune Project Excerpt
I’m drowning now, trying to breathe air. Gasping and panting, I rip off the oxygen mask. This is worst than my worst lung attack.
Dimly, I realize that I’m sitting right next to the water, and the larger waves are actually slapping and pushing at me.
“Nere, it’s time for you. You must go into the water and breathe,” my mother shouts.
I don’t have enough air left in my chest to speak.
:I’m too scared!: I cry mentally instead. :I don’t want to drown. You almost let me drown before.:
“I know, sweetling, but you have no choice now.”
She kneels and smiles at me tenderly, and the next moment she shoves me into the water. I scrabble at the slippery rock, trying to find a handhold, trying to climb out. I have to get my face out of the black water. I have to breathe oxygen now!
Her relentless hands grab my head and force it under the water. I hit at her with all my strength, but she’s too strong for me. I try to rear back and swim away, but somehow she tied me to the rock while I was unconscious.
:You’ll be all right, sweetling.: I hear my mother’s words in my mind. :I promise you. Just relax and breathe in.:
My lungs are pure fire now. I have to breathe. I have no strength left to fight her.
I open my mouth and the water rushes in, and I’m dying. Black spots dance across my eyelids. Then I cough and choke, and I’m not dying anymore. I can breathe. I inhale and exhale, trying to get used to the incredible sensation of cold water rushing in and out of my chest.
I open my eyes under water. Instantly, I realize my vision is different, too. I can see a carpet of purple and gray anemones growing on the rock floor far below me, small crabs scuttling about between them. Dozen of fish dart above the anemones, and clusters of starfish grow like strange orange flowers along the sides of cave. I can see in the dark waters here better than I could before, even with a bright dive torch.
:Nere, are you all right?: my mother asks urgently.
:I-I think so.:
I’m aware that Lena is in the water nearby me, and she’s thrashing and flailing about. Gillian is kneeling right above her, trying to hold her head in the water. While I watch, Lena lands a punch on my mother’s cheek.
:Just relax and breathe in—you can breathe water,: I call to Lena.
She lashes out at me so violently that I give up and leave her to her terror. Instead, I pop my head out of the water and look for Robry. He’s on the other side of me, still sitting on the rock ledge, gasping for breath, his eyes dilated with fear.
:Robry, don’t be afraid. I can breathe water fine now. You’ll be all right.:
I strain against the harness holding me to the rock, and I reach out to him. I don’t want his transition to be as terrifying as mine was.
:Take my hand, dartling.:
He grabs it and slides down into the water beside me.
:Just put your face in the water and breathe. It’s easy as anything.: I try to keep my mental tone light even though a part of me can’t believe I’m breathing seawater.
Because he trusts me, it’s easier for him. He puts his face in the water, and with incredible self-control, he breathes in. He chokes the first time, just as I did, but then he gets the hang of it.
:This is so amazing.:
:It gets more amazing. Open your eyes and look down.:
:I can see everything!:
I turn away from Robry to check on Lena. She is floating very still in the water next to me, her arms braced again the rock, her face in the sea.
:Are you all right?: I ask her tentatively.
Lena turns her head and glares at me. :Yeah, no thanks to your homicidal mother. She held my head under the water.:
:She did that to me, too. At least you punched her a good one.:
It occurs to me then to check on my mother. She sits slumped all alone on the ledge, her face deathly pale. That’s when I realize just how scared she was for us. Even as I watch, she drags her sleeve across her eyes and seems to gather herself. She stands and walks back up the tunnel towards our lab, her solar pistol back in her hand.

Check out this book trailer! 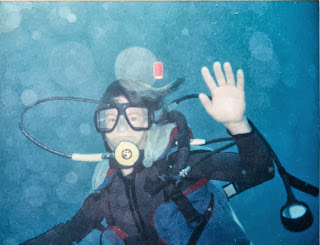 Polly Holyoke has been imagining stories since she was in fifth grade. When she isn’t writing, Polly loves reading, camping, skiing, scuba diving and hiking in the desert (where she quite stupidly got herself bitten by a rattlesnake). She lives with three rescue dogs, two spoiled cats and a nice husband who is tolerant about the piles of books all over their house. Her debut middlegrade novel, THE NEPTUNE PROJECT, is the story of a young girl leading a group of genetically altered teens fighting to survive in the sea. She is thrilled that this novel will be published by Disney/Hyperion and Puffin Books UK summer, 2014. She thinks the best part about being an author is going to work in her sweatpants and getting paid for daydreaming!