The Soccer Fence: A story of friendship, hope, and apartheid in South Africa by Phil Bildner, Book Review 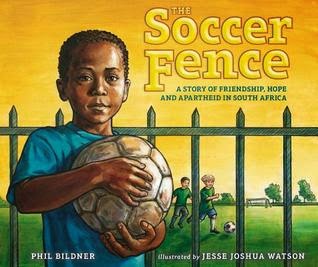 By: Phil Bildner
Illustrated by: Jesse Joshua Watson
Published by: Putnam Juvenile
Released on: March 1st, 2014
Ages: 9 & up
Source: book from publisher to review
Rating: 4 Owlets - It's A Great Read
Purchase from: Amazon | B&N
Add it to Goodreads

In a country struggling with acceptance, hope can come in many different forms.
As a boy, Hector loved playing soccer in his small Johannesburg township. He dreamed of playing on a real pitch with the boys from another part of the city, but apartheid made that impossible. Then, in 1990, Nelson Mandela was released from prison, and apartheid began to crumble. The march toward freedom in South Africa was a slow one, but when the beloved Bafana Bafana national soccer team won the African Cup of Nations, Hector realized that dreams once impossible could now come true. This poignant story of friendship artfully depicts a brief but critical moment in South Africa’s history and the unique role that sports can play in bringing people together.

This was a fabulous read, and not at all what I was excepting.

This is more than just a story about two young boys who grew up on opposites of the fence playing soccer, it's a story full of historical information during a crucial time for the South African Country where the story is set. Bildner does a fabulous job at giving readers historical accounts that spanned a few years, and blended that perfectly into young Hector's love for soccer. Through Hector's eyes, readers learn about what it was like for him growing up in a country that was divided by race, and brought together by a love of soccer. The story spans from when Hector was really young, to Nelson Madnela's release from prison, his presidency win, and the 1996 Cup of Nations.

This is a book that not only tells the story of a young soccer fan who grew up in South Africa, this book teaches young readers about historical events that brought a country together. I'll admit I learned something from reading this book. The story is insightful, easy to read and understand. Bildner does a great job at teaching readers about apartheid in a way that young readers will understand it. I loved that he included the historical references about Nelson Mandela, his presidency win, and his love for sports. As the author points out in Hector's story, Mandela used sports as a way to bring his country together. The illustrations added a lot to the story as well. I like the way Watson was able to create pictures that showed a lot of emotion, without getting carried away with the illustration. I loved the end of the book as Watson created what looks like newspaper clippings that include the author's notes for the apartheid timeline which started dates from 1912 and goes through 2010.

The Soccer Fence is great read for fans of soccer and historical fiction. This is a book that would be great for grades 3rd-5th.

* Teachers can check out Penguin's reading guide for teachers about the book here.