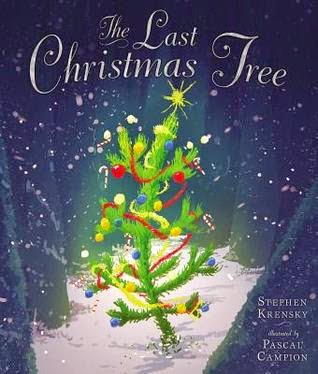 By: Stephen Krensky
Published by: Dial (Penguin Kids)
Released on: 10.16.14
Ages: 5 and up
Source: purchased book
Rating: 5 Owlets - I Loved It
Purchase from: Amazon | B&N
Add it to Goodreads

Among the grand balsam firs and pines at the Christmas tree lot is a little hunched tree that is missing several branches. Still, no tree is more filled with the spirit of Christmas. As the weeks go by, many others are selected but still the little tree keeps up its hope of finding the perfect family. On Christmas Eve, now the last tree in the lot, a special visitor (Ho, Ho, Ho!) might just give the little tree what it wants most of all.

I realize it's now after Christmas, but I have to share my love of this book. This is a book I picked up today for a steal of a deal at the book store. Just in case you didn't know, Barnes & Noble has all their Christmas books marked at 50% off! There was no way I could say no to prices like that.

A wonderful story that captures the magic of the Christmas season. This is a book with a heartwarming story that children of all ages will love. Had it not been for a friend of who works at Penguin, I would not have even heard about this book. What is sad, because this has become one of my favorite children's Christmas books. The story is beautiful told. The illustrations are lovely. This book is absolutely fabulous. I loved it! This is a Christmas book I highly recommend picking up.

There were so many awesome MG releases this year. Unfortunately I've got a stack of MG books I was hoping to read before the end of 2014, and sadly still waiting to be read. Thankfully I've got a whole new year ahead of me to read them. This weekend I did manage to read a couple MG books, and The Ice Dragon was one of them. 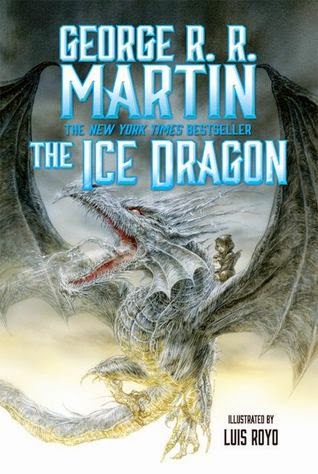 The Ice Dragon is an enchanting tale of courage and sacrifice for young readers and adults by the wildly popular author of the #1 New York Times bestselling Song of Ice and Fire series, George R.R. Martin. Lavish illustrations by acclaimed artist Luis Royo enrich this captivating and heartwarming story of a young girl and her dragon.In the world of A Song of Ice and Fire the ice dragon was a creature of legend and fear, for no man had ever tamed one. When it flew overhead, it left in its wake desolate cold and frozen land. But Adara was not afraid. For Adara was a winter child, born during the worst freeze that anyone, even the Old Ones, could remember. Adara could not remember the first time she had seen the ice dragon. It seemed that it had always been in her life, glimpsed from afar as she played in the frigid snow long after the other children had fled the cold. In her fourth year she touched it, and in her fifth year she rode upon its broad, chilled back for the first time. Then, in her seventh year, on a calm summer day, fiery dragons from the North swooped down upon the peaceful farm that was Adara’s home. And only a winter child—and the ice dragon who loved her—could save her world from utter destruction.

This is an epic children's fantasy. Beautifully written and illustrated, this is George's debut book in children's literature. I'm amazed at all George R. R. Martin gave me in only 120 pages. It only took page one to hook me, and by the end of the first chapter I was in love. This is definitely a book fans of Martin's, children's literature, and fantasy will love.

The story follows that of a young girl, Adara, who was born in winter. Being a child of winter made her come across as different than children born during the other seasons. Not one to show much emotion or to receive much affection, she finds relief in the winter. The only time she never feels alone. Being born during the cold season gave Adara a special ability to connect with the feared and rare Ice Dragon. She loves spending time with the feared creature. When her family is threatened she and her beloved Ice Dragon will made a courageous, and very surprising sacrifice to save them.

I loved this story. I love the illustrations that accompany it. They are gorgeous. The cover art on both the inside covers of the book are my favorite. This edition of the book also includes a poster found on the inside of the cover jacket. Check out more of The Ice Dragon illustrations here.

THE TUTTLE TWINS and The MIRACULOUS PENCIL; Book Blitz & Giveaway

The Tuttle Twins and the Miraculous Pencil by Connor Boyack

In this second book of the Tuttle Twins series, Mrs. Miner leads the twins and their classmates on a fun field trip to learn how pencils are made using parts from all over the world—and how in an economy, people from all over the world work together in harmony to produce helpful products that improve our lives. Teach your kids about the free market with a fun story and bright, engaging illustrations! Purchase

Connor Boyack is president of Libertas Institute, a public policy think tank in Utah. He is the author of several books on politics and religion, along with hundreds of columns and articles championing individual liberty. His work has been featured on international, national, and local TV, radio, and other forms of media. A California native and Brigham Young University graduate, Connor currently resides in Lehi, Utah, with his wife and two children. Facebook * Twitter

Elijah Stanfield is owner of Red House Motion Imaging, a media production company in Washington. A longtime student of Austrian economics, history, and the classical liberal philosophy, Elijah has dedicated much of his time and energy to promoting the ideas of free markets and individual liberty. Some of his more notable works include producing eight videos in support of Ron Paul’s 2012 presidential candidacy. He currently resides in Richland, Washington, with his wife April and their five children.