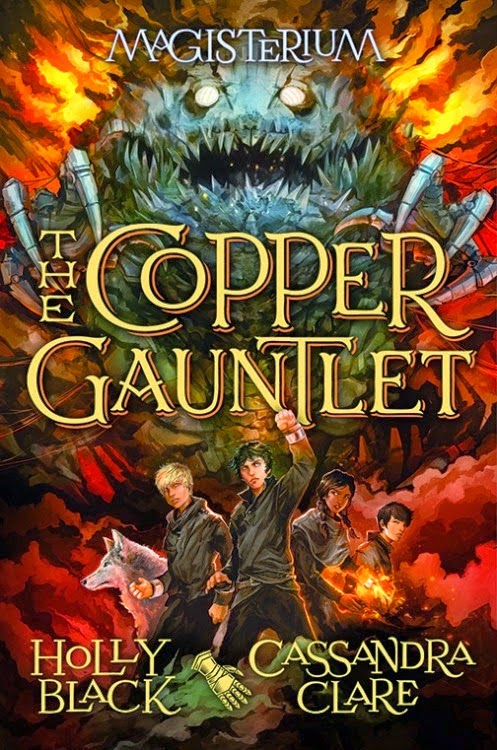 Copper Gauntlet snippet
Hey miz Clare!!!! I love your books! Seriously, they mean a lot to me. So…I was wondering Since you put out quite a few dark artifices snippets maybe you could put out some copper gauntlet ones??? Maybe. You know if you had some lying around and Miz black doesn’t mind. Just a thought Have a lovely afternoon! Your books are my moon and stars — venus-backpack
Miz Black doesn’t mind! From The Copper Gauntlet:
Call’s head hurt.
"I don’t want anything bad to happen to Aaron," Call said. That was the one thing he was sure about. "I never did."
Aaron looked miserable. “Well, we’re not going to get anywhere tonight,” he said. “It’s late and we’re all tired. Maybe if we sleep for a couple of hours, we can figure something out in the morning.”
They looked at the two beds. Each was about big enough for one adult or two kids.
"I call that one," said Jasper. He pointed at Tamara and Call. "And I call Aaron, because you’re creepy and you’re a girl."
"I can sleep on the floor," Aaron offered, looking at the expression on Tamara’s face.
"That doesn’t help anyone but Jasper," said Tamara crossly, and got onto the leftmost bed. "It’s fine, Call; we’ll just sleep on top of the covers. Don’t worry about it."
Call thought that maybe he should offer to sleep on the floor like Aaron had, but he didn’t want to. His leg already hurt and, besides, he knew for a fact that there were sometimes rats hiding in the barn.
"Okay," he said, climbing in gingerly beside her.
It was weird.
In the other bed, Jasper and Aaron were trying to share a single pillow. There was a muffled cry as someone was punched. Call pushed the pillow on his bed over to Tamara, and laid his head down on his crooked arm.
He closed his eyes, but sleep didn’t come. It was uncomfortable trying to keep to one side of the bed, making sure that even his toes didn’t stray over to Tamara’s side. It didn’t help that he kept seeing the words in the letters Master Joseph had written, painted on the backs of his eyelids.
"Call?"
He opened his eyes. Tamara was looking at him from a few inches away, her eyes big and dark.  ”Why are you so important?” she whispered.
He felt the warm gust of her breath on his cheek.
"Important?" he echoed. Jasper had started to snore.
"All those letters," she said. "From Master Joseph. I thought they’d be about Aaron. He’s the Makar. But they were all about you. Call is the most important thing.”
"I mean …I guess because he’s my dad," Call said, floundering. "So I’d be important to him."
"It didn’t sound like that kind of important," Tamara said softly. "Call, you know, you can tell us anything, right?"
Call wasn’t sure how to answer her. He was still trying to decide when Havoc began to howl.

Posted by Mundie Moms at 9:16 AM Labels: Cassandra Clare, Holly Black, The Copper Gauntlet, The Iron Trial, The Magisterium Series