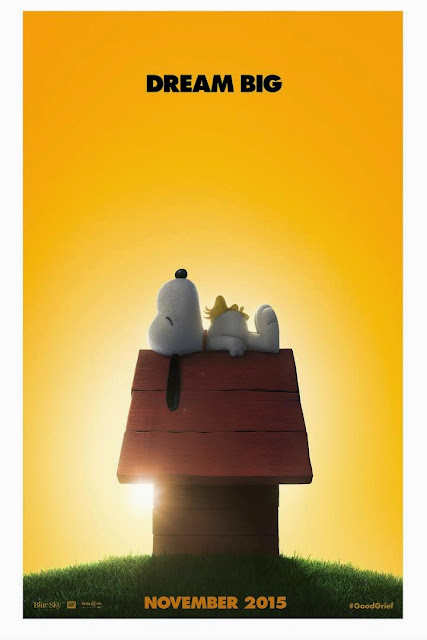 Calling all Peanuts Fans, have you heard the word? The PEANUTS are coming to the big screen this fall! 20th Century Fox will be releasing THE PEANUTS movie 11.6.15.  Check out the movie trailer below:

SYNOPSIS
Charlie Brown, Snoopy, Lucy, Linus and the rest of the beloved “Peanuts” gang make their big-screen debut, like they’ve never been seen before, in state of the art 3D animation.  Snoopy, the world’s most lovable beagle – and flying ace – embarks upon his greatest mission as he takes to the skies to pursue his arch-nemesis The Red Baron, while his best pal, Charlie Brown, begins his own epic quest.  From the imagination of Charles M. Schulz and the creators of the ICE AGE films, THE PEANUTS MOVIE will prove that every underdog has his day. 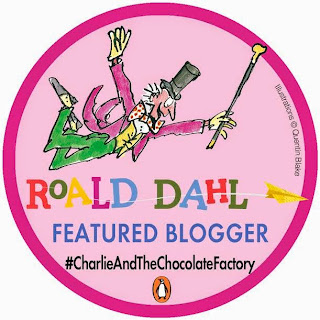 Celebrate Roald Dahl all month long here on Mundie Kids! I am so thrilled to be a blog host for one of my favorite childhood authors, Roald Dahl. I still remember the first time my teachers read James and the Giant Peach, WIlly Wonka and the Chocolate Factory, and the BFG out loud to our class. I was hooked, and wanted more. Now as a mother, I'm thrilled that my children are finding Roald's classics. In hosting this month's collection of Roald Dahl books, I was also introduced to a few of Roald's children's books I didn't know about. I'm looking forward to featuring these books on the blog this month.

Through out the month of May I'll be sharing snippets, reviews, exclusive features, and a giveaway for ALL of the books listed below. Check out this list of fabulous reads by Roald Dahl. and let me know which book from the list is your favorite read. Be sure to stop by each week to enter to wiN!

James and the Giant Peach (January)

A little magic can take you a long way.

After James Henry Trotter's parents are tragically eaten by a rhinoceros, he goes to live with his two horrible aunts, Spiker and Sponge. Life there is no fun, until James accidentally drops some magic crystals by the old peach tree and strange things start to happen. The peach at the top of the tree begins to grow, and before long it's as big as a house. Inside, James meets a bunch of oversized friends—Grasshopper, Centipede, Ladybug, and more. With a snip of the stem, the peach starts rolling away, and the great adventure begins!

Esio Trot (February)
An ancient spell, 140 tortoises, and a little bit of magic…

The Twits (March)
How do you outwit a Twit?

Mr. and Mrs. Twit are the smelliest, nastiest, ugliest people in the world. They hate everything—except playing mean jokes on each other, catching innocent birds to put in their Bird Pies, and making their caged monkeys, the Muggle-Wumps, stand on their heads all day. But the Muggle-Wumps have had enough. They don't just want out, they want revenge.

Charlie and the Chocolate Factory (April & May)
Willy Wonka's famous chocolate factory is opening at last!

But only five lucky children will be allowed inside. And the winners are: Augustus Gloop, an enormously fat boy whose hobby is eating; Veruca Salt, a spoiled-rotten brat whose parents are wrapped around her little finger; Violet Beauregarde, a dim-witted gum-chewer with the fastest jaws around; Mike Teavee, a toy pistol-toting gangster-in-training who is obsessed with television; and Charlie Bucket, Our Hero, a boy who is honest and kind, brave and true, and good and ready for the wildest time of his life!

Danny the Champion of the World (June)
Can Danny and his father outsmart the villainous Mr. Hazell?

Danny has a life any boy would love—his home is a gypsy caravan, he's the youngest master car mechanic around, and his best friend is his dad, who never runs out of wonderful stories to tell. But one night Danny discovers a shocking secret that his father has kept hidden for years. Soon Danny finds himself the mastermind behind the most incredible plot ever attempted against nasty Victor Hazell, a wealthy landowner with a bad attitude. Can they pull it off? If so, Danny will truly be the champion of the world.
Matilda (July)
The Trunchbull is no match for Matilda!
Matilda is a sweet, exceptional young girl, but her parents think she's just a nuisance. She expects school to be different but there she has to face Miss Trunchbull, a kid-hating terror of a headmistress. When Matilda is attacked by the Trunchbull she suddenly discovers she has a remarkable power with which to fight back. It'll take a superhuman genius to give Miss Trunchbull what she deserves and Matilda may be just the one to do it!'

The BFG (August)
Captured by a giant!
The BFG is no ordinary bone-crunching giant. He is far too nice and jumbly. It's lucky for Sophie that he is. Had she been carried off in the middle of the night by the Bloodbottler, or any of the other giants—rather than the BFG—she would have soon become breakfast. When Sophie hears that the giants are flush-bunking off to England to swollomp a few nice little chiddlers, she decides she must stop them once and for all. And the BFG is going to help her!
Fantastic Mr. Fox (September)
Nobody outfoxes Fantastic Mr. Fox!
Someone's been stealing from the three meanest farmers around, and they know the identity of the thief—it's Fantastic Mr. Fox! Working alone they could never catch him; but now fat Boggis, squat Bunce, and skinny Bean have joined forces, and they have Mr. Fox and his family surrounded. What they don't know is that they're not dealing with just any fox—Mr. Fox would rather die than surrender. Only the most fantastic plan can save him now.
The Witches (October)
This is not a fairy tale. This is about real witches.
Grandmamma loves to tell about witches. Real witches are the most dangerous of all living creatures on earth. There's nothing they hate so much as children, and they work all kinds of terrifying spells to get rid of them. Her grandson listens closely to Grandmamma's stories—but nothing can prepare him for the day he comes face-to-face with The Grand High Witch herself!
George’s Marvelous Medicine (November)
A taste of her own medicine.
George is alone in the house with Grandma. The most horrid, grizzly old grunion of a grandma ever. She needs something stronger than her usual medicine to cure her grouchiness. A special grandma medicine, a remedy for everything. And George knows just what to put into it. Grandma's in for the surprise of her life—and so is George, when he sees the results of his mixture!
The Enormous Crocodile (December)
Look out kids!
The Enormous Crocodile is incredibly hungry—and incredibly greedy. His favorite meal is a plump, juicy little child, and he intends to gobble up as many of them as he can! His is sure that his “secret plans and clever tricks” cannot be foiled. But when the other animals in the jungle join together to put an end to his wicked schemes, the Enormous Crocodile learns a lesson he won’t soon forget.