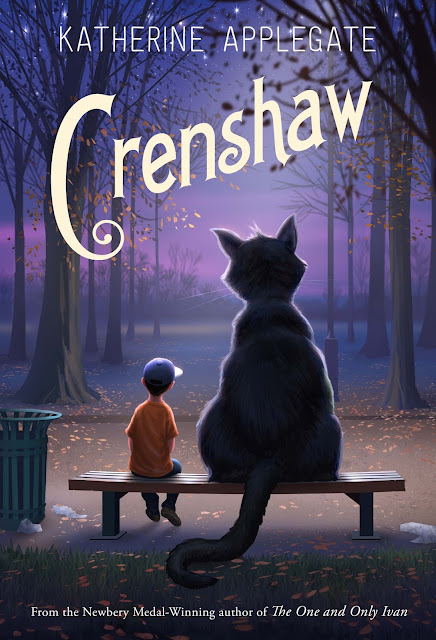 Entertainment Weekly debuted Katherine Applegate's CRENSHAW, book trailer. The author of The One and Only Evan, will have her newest book released TOMORROW, September 22nd, 2015 from Feiwel & Friends (MacMillan).

In her first novel since winning the Newbery Medal, Katherine Applegate delivers an unforgettable and magical story about family, friendship, and resilience.

Jackson and his family have fallen on hard times. There's no more money for rent. And not much for food, either. His parents, his little sister, and their dog may have to live in their minivan. Again.

Crenshaw is a cat. He's large, he's outspoken, and he's imaginary. He has come back into Jackson's life to help him. But is an imaginary friend enough to save this family from losing everything?

Read the excerpt, which also debuted with her book trailer, below:

Excerpt from Crenshaw, Chapter 5:
The first time I met Crenshaw was about three years ago, right after first grade ended.
It was early evening, and my family and I had parked at a rest stop off a highway. I was lying on the grass near a picnic table, gazing up at the stars blinking to life.
I heard a noise, a wheels-on-gravel skateboard sound. I sat up on my elbows. Sure enough, a skater on a board was threading his way through the parking lot.
I could see right away that he was an unusual guy.
He was a black and white kitten. A big one, taller than me. His eyes were the sparkly color of morning grass. He was wearing a black and orange San Francisco Giants baseball cap.
He hopped off his board and headed my way. He was standing on two legs just like a human.
“Meow,” he said.
“Meow,” I said back, because it seemed polite.
He leaned close and sniffed my hair. “Do you have any purple jelly beans?”
I jumped to my feet. It was his lucky day. I just happened to have two purple jelly beans in my jeans pocket.
They were a little smushed, but we each ate one anyway.
I told the cat my name was Jackson.
He said yes, of course it is.
I asked him what his name was.
He asked what did I want his name to be.
It was a surprising question. But I had already figured out he was a surprising guy.
I thought for a while. It was a big decision. People care a lot about names.
Finally I said, “Crenshaw would be a good name for a cat, I think.”
He didn’t smile because cats don’t smile.
But I could tell he was pleased.
“Crenshaw it is,” he said.
* * * * * *

This is a book that already has the makings of being an unforgettable read. I'm looking forward to featuring my review for it shortly here on the blog.

* Trailer and excerpt where featured on Entertainment Weekly, here.