Hello and welcome to today's cover reveal for Bryce Moore's THE MEMORY THIEF! Set to be released on September 20th, 2016 from Adaptive Books, THE MEMORY THIEF has been called, "An evocative middle grade novel that explores the power of memory and family, that is INSIDE OUT meets a modern SOMETHING WICKED THIS WAY COMES."

CHECK OUT THIS COVER!! 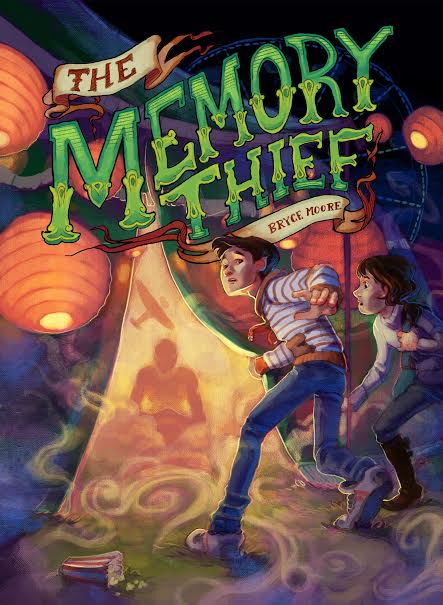 What a great cover! It's definitely got that catchy middle grade vibe to it. It's one that I'd pick up if I knew nothing else about the book. I like the illustrations, and I really like the color scheme.

A NOTE FROM THE AUTHOR ABOUT THE COVER

When I first started out with the idea for The Memory Thief, I really wanted to recreate a feeling more than anything else: the feeling of watching those old school Disney horror movies I watched as a kid. Watcher in the Woods was a favorite, but the best was by far Something Wicked This Way Comes. I loved how the whole film gave me the creeps, and when I went to my county fair in Maine, I couldn't help but keep remembering those experiences. So when I saw the first draft of the cover, with its spooky carnival vibe and air of mystery, I was instantly in love. It does a great job of representing the feeling I had started out with, and it was a confirmation to me that I'd ended up in the right spot. The color scheme, the characters, the setting, the lettering--it was all right in line with how I'd pictured it, and I think it's the best sort of introduction The Memory Thief could ask for to its audience. I can't wait to share the whole book with you this fall, just in time for fair season.

Twin brother and sister Benji and Kelly wander off at the local county fair after witnessing their parents argue. When Benji runs into a group of bullies, he escapes into a tent called The Memory Emporium, where he meets a strange old man inside named Louis. The old man shows him a magically vivid memory of a fighter pilot, in the hopes of getting Benji to pay to see other memories Louis has collected from people over the years.

Benji quickly realizes the ability to take memories could help his parents stop fighting with each other, and he asks Louis to teach him how to become a “memory thief.”  But Louis isn't the only person with the ability to show and manipulate memories. There's also the mysterious Genevieve, a Memory Thief with much more nefarious motives.

Benji learns how to manipulate memories himself, but having that power comes at a cost to his family, and possibly to his own mind as well. Genevieve’s powers get out of control as she steals more and more memories from people in town – including Benji’s sister Kelly. Benji must learn to use this newfound power, as he is the only one able to stop Genevieve.


You can pre-Order it from: Barnes & Noble / Add it to Goodreads

Bryce Moore is also the author of Vodnik. When he’s not authoring, he’s a librarian in Western Maine, where he’s also the current president of the Maine Library Association. He’s been happily married since 2001 and is doing his best to raise three new geeks of his very own, while simultaneously convincing his wife that sci-fi/fantasy is awesome. He uses his spare time to fix up his old 1841 farmhouse and shovel snow.