We're celebrating the release of Tahereh Mafi's debut middle grade book, FURTHERMORE! I'm so thrilled to have both Mundie Kids and Mundie Moms be apart of today's blog tour, hosted by Penguin. Today's stop features my 4 star review of this fantastic read. Over on Mundie Moms you can also read a few of my favorite quotes from the book, here. 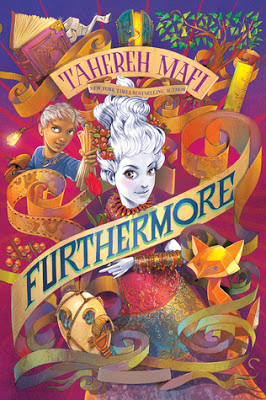 By: Tahereh Mafi
Published by: Dutton Books
Released on: August 30th, 2016
Ages: 9-12 years old
Purchase from: the Publisher | Amazon | B&N
Add it to Goodreads
Rating: 4 Stars - I Enjoyed It!
* I received an arc of this book from BEA

The bestselling author of the Shatter Me series takes readers beyond the limits of their imagination in this captivating new middle grade adventure where color is currency, adventure is inevitable, and friendship is found in the most unexpected places.

There are only three things that matter to twelve-year-old Alice Alexis Queensmeadow: Mother, who wouldn't miss her; magic and color, which seem to elude her; and Father, who always loved her. The day Father disappears from Ferenwood he takes nothing but a ruler with him. But it's been almost three years since then, and Alice is determined to find him. She loves her father even more than she loves adventure, and she's about to embark on one to find the other.

But bringing Father home is no small matter. In order to find him she'll have to travel through the mythical, dangerous land of Furthermore, where down can be up, paper is alive, and left can be both right and very, very wrong. Her only companion is a boy named Oliver whose own magical ability is based in lies and deceit--and with a liar by her side in a land where nothing is as it seems, it will take all of Alice's wits (and every limb she's got) to find Father and return home to Ferenwood in one piece. On her quest to find Father, Alice must first find herself--and hold fast to the magic of love in the face of loss.

An imaginative adventure about friendship, finding one's self, magic, and love. This is a story that you won't soon forget!

FURTHERMORE is a story that reminded me of stories I loved reading as a kid. There's a mix of fantasy, adventure, magic, friendship, the journey of finding your self worth, family, believing in yourself, along with plenty of imagination. I loved how all these elements molded together. There is something for everyone in this story. I also really liked the way this story is narrated. It's unique, and not a narration that I've come across before. It definitely gave the story a very authentic, whimsical feel.

This is a story about a girl named Alice. Alice lives in a world full of color, but she herself is void of color. This girl is something amazing. I really enjoyed Alice. She is one of those characters you can't help but love.  She's the kind of character any reader can relate to, no matter how old you are. She's not flawless, but she does her best. She's selfless, and does all she can for her family, even when she feels they think it's not enough. She's just a girl who's not only trying to find her dad, but her place in the world.

Often feeling like she's an outsider within her own family, and community, Alice's adventure teaches her a lot about who she is, and the power that comes from within. I also enjoyed her friendship with Oliver. These two learn a lot from each other, and help each other learn about about themselves. I really liked how their friendship blossomed as the story goes on. Their's is one that definitely had a rocky start, and ups and downs through out the way, but it's a great friendship non the less. I also love that this story has a talking origami fox! Seriously, no other story that I know have has that.

I love that Alice is a character that we're like, or have been like at one time or another. There is a little bit of Alice in all of us. I love the message Mafi embeds into Alice's character. She's a character we can either relate to now, a character we sympathize with, because we once felt those same insecurities she felt. Like Alice, we realize there's far more to who we are than we think. Our power lies within the way we view ourselves, and not how we thing others view us.

The worlds of Furthermore are something unique! Similar to the world of Alice in Wonderland, Ferenwood, a world within Furthermore's world, was at times intriguing as much as it was confusing. I felt like it was created that way on purpose. It's not a world meant to be lingered in or fully understood. It's an imaginative world that felt like it was meant to be viewed differently with each unique reader. The world felt like a character of it's own. Aside from Furthermore, Ferenwood runs on it's own set of rules, complete with characters who are there to offer guidance in a way that Alice had to decipher in order to understand, and other characters who were not so nice. Like Alice in Wonderland, the world itself is set up in such a way, that it's up to the character to figure out her own way to her destination, and in doing so, does she finally break free of the world.

With her debut MG book, Mafi has proven yet again why she still stands as one of my all time favorite authors. FURTHERMORE is one of those magical books where the characters, and world spring to life, allowing your imagination to run wild, as you take to heart the powerful message within this wonderful story.  Mafi's writing is vibrant, creative, and magical. I really enjoy her story telling in Furthermore. It's so easy for me to get swept up into her stories. She has a talent for creating characters I can relate to, creating worlds that are visually stunning, and easy to imagine, and stories that always leave me wanting more, no matter how satisfying her book's ending is. Furthermore had a bit of all this.