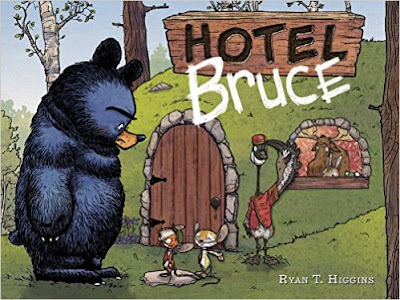 Written & Illustrated by: Ryan T. HigginsPublished by: Disney HyperionReleased on: October 18th, 2016Rating: 4 Owlets - We Enjoyed ItPurchase from: Amazon | B&NAdd it to GoodreadsA copy of this book was provided by the publisher in exchange for my honest review

When Bruce gets home from a southern migration trip with his goslings, he is tired. He is grumpy. And he is definitely not in the mood to share his home with the trio of mice who have turned his den into a hotel.

There's a possum pillow fight wreaking havoc in one room, a fox luring guests into a stew in the kitchen, and a snuggly crew of critters hogging the bed. Bruce growls and grumbles and tries to throw them all out, but the entrepreneurial mice just can't take a hint. Bruce is in a little over his head, especially once the goslings join the staff. Will this grumpy bear ever get his quiet, peaceful den back to himself?

Bruce is back with a whole new adventure. Poor grumpy Bruce can't seem to catch a break. Continuing not long after the first story ended, the geese aren't babies any more, and Bruce continues to take them south each winter for their yearly migration. Upon returning home, Bruce discovers his beloved woodland home has been turned into a hotel by three mice.

Once again, Bruce's misfortune makes for a humor filled story, both kids and adults will enjoy. The animals that were packed into Bruce's house, make this story even more entertaining. We loved the moose in his bed, and the bus full of elephants. Oh, and the three mice definitely give Bruce a run for his money. They're hilarious. Like the previous story, no matter how grumpy this bear can be, he still has a soft spot, and does a good deed. If you loved Mother Bruce, you'll enjoy Hotel Bruce.

Welcome to Day #9 of the Impyrium Blog Tour!

To celebrate the release of Imyprium by Henry H. Neff (10/4/16), blogs across the web are featuring exclusive content from Henry and 10 chances to win a SIGNED copy of Impyrium, as well as a Grand Prize Giveaway!


Making Sure Fantasy Has a Soul by Henry H. Neff 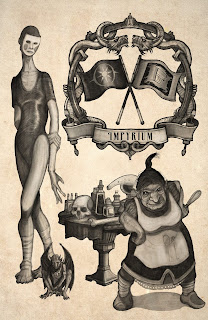 Fantasy is often defined by two elements: creative world building and the presence of magic. And these are pretty fun, not only to create but to experience as a reader. But they also present seductive, even dangerous temptations. If a writer isn’t careful, he or she can get lost in the world building and forget that stories are ultimately about characters, their struggles and relationships. World building and magic are necessary but they’re not sufficient elements of successful fantasy. In order to hit on all cylinders, fantasy must have a soul.

We’ve all seen movies where a director or studio was so preoccupied with special effects that the plot and performances were mere footnotes. These aren’t stories, so much as mind-numbing advertisements for the latest CGI or motion-capture technology. I use the term “mind-numbing” advisedly. The brain can only absorb so much AMAZING!!! stuff in a short period of time before it loses the ability to process and appreciate what it’s seeing. Context matters. By making everything “spectacular” you’re merely guaranteeing that nothing is.

I keep that in mind with IMPYRIUM, particularly the use of magic and supernatural abilities. It may sound trite but magic should be…magical. If it’s everywhere, it loses its ability to dazzle and delight my readers. By limiting its use and capabilities, magic retains its scarcity value and ensures that my focus remains where it should be: on my characters and story. A second benefit of limitations on magic is that overuse can lead to serious plot holes. Common culprits are teleportation and time travel. When characters can simply appear wherever they wish, or jump back in time, a writer opens himself to nagging “But why wouldn’t they just…?” questions. Such abilities can unbalance a world, undermine its logic, and deprive writers of key storytelling opportunities. We’ve all heard the expression, “Getting there is half the fun.” Well, it’s true. And if your characters can simply vanish and reappear in distant destinations, there’s far less story to tell. Don’t deprive your readers of an opportunity to experience your world and wander a bit between points A and B. But that advice also comes with a warning: Don’t be the Tour Guide from Hell.

Tour Guides from Hell (TGH for short) have built an amazing world and are determined to show you every single bit of it. They’ve worked out elaborate maps, fabulous locations, detailed genealogies, new languages, entire histories and civilizations! A TGH has spent months, years, even decades creating this virtual world and may have become lost in its minutiae. The problem isn’t that the world and its facets aren’t interesting or expertly crafted; it’s that many have nothing to do with the central story or main character arcs. George R.R. Martin is an extraordinary storyteller and a peerless world builder, but he also suffers from this affliction. The further we get into A Song of Ice and Fire, the more his gifts become handicaps. Martin is so enamored with his world that he literally cannot help himself when it comes to relaying every detail. By the fourth or fifth book, I’m not certain we need every feast and appetizer described in depth. The same holds for peripheral characters. While I’m sure the third steward of House X is an excellent and interesting fellow, I don’t need to learn his entire family history—much less his hopes and dreams—before he catches an axe to the face on the next page. Fantasy writers must discriminate between what they need to know and what the reader needs to know. Otherwise, the story can lose focus and you’ll find Danaerys still spinning her dragon’s wheels across the Narrow Sea…

This isn’t to take shots at Martin, a writer I adore. It’s to point out that even the greats can fall prey to fantasy’s temptations. The reason Martin is among the best fantasy writers isn’t because he’s told me about every Stark to ever occupy Winterfell—it’s because his story and characters DO have soul. I care an awful lot about Tyrion and Danaerys, Jon Snow, and young Bran entwined in the roots of a weirwood tree. It’s because Martin’s done such a stellar job of fleshing out his characters that I’m willing to wade through passages and storylines I might otherwise find tedious. I need to know what happens!

I’ve tried to keep this in mind with IMPYRIUM, its world and the characters that inhabit it. There have been forty-two Divine Empresses in the Faeregine dynasty. I need to know who they were, their timelines and the events that defined their individual reigns. But you certainly don’t. I have lots of ideas about various territories, worlds, creatures, and factions, and I’ll develop many in some depth. I do this with the knowledge that you’ll never see them all. Why not? Because I can’t possibly cram them all into a story that also maintains its focus, pace, and allows you to get to know Hazel and Hob. They’re the main characters and thus the heart and soul of IMPYRIUM. Without their struggles and friendship, my elaborate world would just be an empty, albeit fancy stage.

Stop by Ravenous Reader tomorrow for day #10 of the tour! 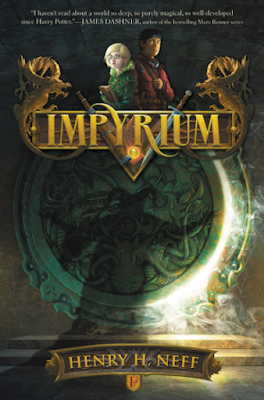 In the first book of Henry H. Neff’s new high-stakes middle grade fantasy series, two unlikely allies confront a conspiracy that will shake the world of Impyrium to its core.

For over three thousand years, the Faeregine dynasty has ruled Impyrium. But the family’s magic has been fading, and with it their power over the empire. Whether it’s treachery from a rival house, the demon Lirlanders, or rebel forces, many believe the Faeregines are ripe to fall.

Hazel, the youngest member of the royal family, is happy to leave ruling to her sisters so that she can study her magic. But the empress has other plans for her granddaughter, dark and dangerous plans to exploit Hazel’s talents and rekindle the Faeregine mystique. Hob, a commoner from the remote provinces, has been sent to the city to serve the Faeregines—and to spy on them.

One wants to protect the dynasty. The other wants to destroy it. But when Hazel and Hob form an improbable friendship, their bond may save the realm as they know it…or end it for good. 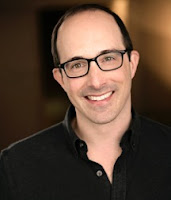 Henry H. Neff grew up outside Chicago before going off to Cornell University, Impyrium is his second series. The first, The Tapestry, is a five-volume epic that follows the life and adventures of Max McDaniels. He lives in Montclair, New Jersey, with his wife and two sons. You can also find him at www.henryhneff.com. where he majored in history. Before becoming a writer, he was a management consultant and also taught history at a San Francisco high school.