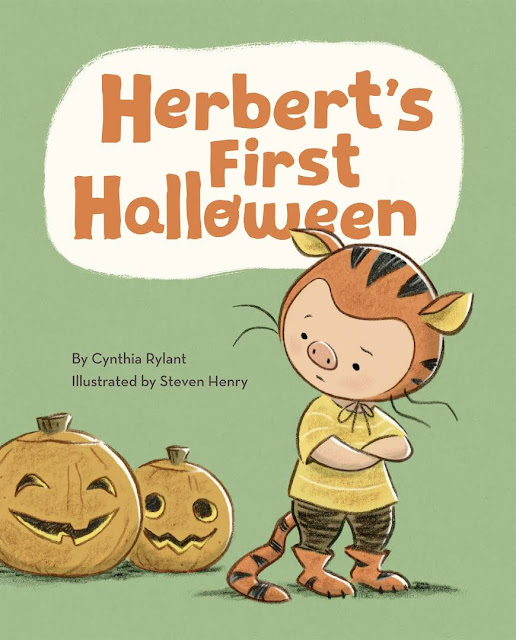 By: Cynthia Rylant
Illustrated by: Steven Henry
Published by: Chronicle Books
Released on: August 1st, 2017
Ages: 2 & up
Purchase from: The Publisher | Amazon | B&N
Add it to Goodreads
Rating: 5 Owlets
* A copy of this book was provided by the publisher in exchange for my honest review

Herbert is deeply doubtful about his first Halloween—but with a little help from his dad and a special tiger costume, Herbert might just find confidence on Halloween night.

Together, father and son practice roaring, carve a pumpkin, and venture out in search of candy. And by the end of the night, Herbert finds his doubts have melted away. A sweet introduction to Halloween and to being brave, this book is sure to delight the youngest of trick-or-treaters.

A first Halloween must read! Halloween can be a little scary, especially if it's a child's first time experiencing trick or treating, dressing up etc. Herbert's First Halloween takes those worries, and fears, and puts them into an adorable story, with equally adorable illustrations.

Herbert is unsure about what to except his first Halloween. He's a little anxious. Thanks to his dad's fun loving ways, Herbert realizes Halloween can be really fun and exciting. With the help of his dad, Herbert experiences carving his first pumpkin, making his first (adorable tiger) costume and even practices pretending to be a tiger. He even has fun dressing up with his dad to go trick or treating. Herbert has so much fun, he forgets that he's worried. He even knows what he's going to dress up as next Halloween.

This book is such an adorable story. With it's easy to read, and comprehend words, and down right cute illustrations, this book will help ease kids into the Halloween festivities and shows them what it's all about. A lot fun! I love that the dad's role in helping Herbert ease into Halloween traditions. Definitely worth picking up this cute story! 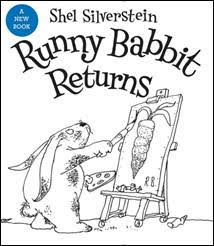 Check it out Shel Silverstein fans! Harper Collins Childrens Books will be publishing Runny Babbit Returns! This never before published collection of spooky poems by Shel Silverstein is sure to be a hit with fans. Check out this sneak peak: 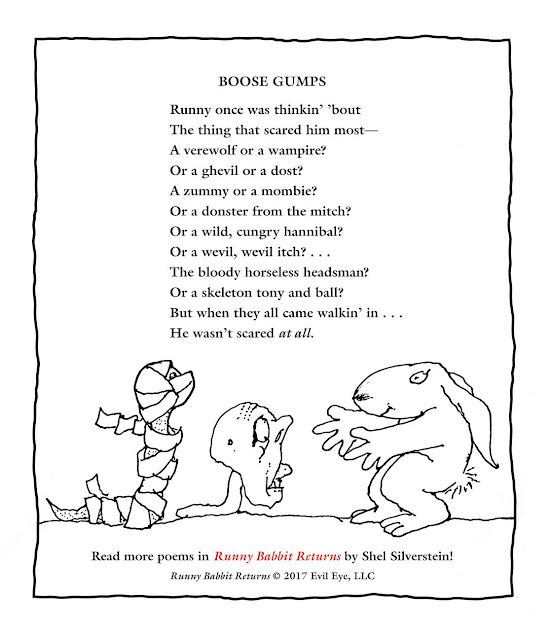 Per the Official Press Release we received from Harper Collins: 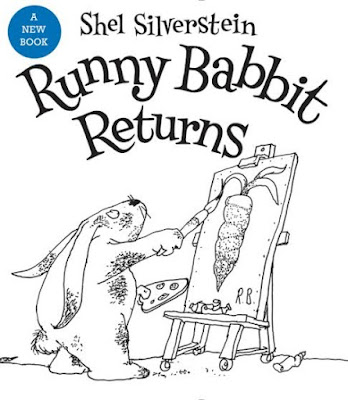 Runny Babbit Returns takes us back to the green woods of Runny Babbit with 41 never-before-published poems and drawings. Compiled from completed but unpublished works in the Silverstein archive, this next installment encompasses beloved themes such as friendship, kindness, family, and, of course, food. The first Runny Babbit is a charming and witty collection of spoonerisms written and illustrated by Silverstein before his death and his first book published posthumously, in 2005. Filled with creative words and phrases with letters or syllables swapped (bunny rabbit becomes Runny Babbit), this poetry book follows the warm, insightful, and laugh-out-loud adventures of an endearing cast of characters. Maurice Sendak said of Runny Babbit, “I wish I had done this book!”

Runny Babbit has sold over 770,000 copies and spent 39 weeks on the New York Times bestseller list. This companion book, Runny Babbit Returns, features extraordinarily imaginative poems that embody Silverstein’s iconic humor and style, with tongue-twisting wordplay and uproarious characters. New and old readers alike won’t want to miss their chance to revisit their favorite Runny and meet even more of his woodland friends.

“We’re delighted to continue the legacy of the extraordinary Shel Silverstein, a household name for over fifty years,” said Suzanne Murphy, President and Publisher of HarperCollins Children’s Books. “This never-before-published collection of poems and drawings will be cherished by readers of all ages and is a wonderful companion book to follow Runny Babbit.”

Generations have grown up with the works of Shel Silverstein, known not only as a poet and illustrator but also for his work as a cartoonist, playwright, performer, recording artist, and Grammy Award–winning songwriter. Silverstein’s children’s books have sold more than 39 million copies in the U.S. alone and have been translated into 46 foreign languages. He has encouraged children to dream and dare to imagine the impossible with his exceptional poetry and unforgettable characters.

Shel Silverstein is the author of Lafcadio, the Lion Who Shot Back; A Giraffe and a Half; The Giving Tree; Who Wants a Cheap Rhinoceros?; Don’t Bump the Glump!; Where the Sidewalk Ends; The Missing Piece; A Light in the Attic; The Missing Piece Meets the Big O; Falling Up; Runny Babbit; and Every Thing On It.  He was a cartoonist, playwright, poet, performer, recording artist, and Grammy-winning/Oscar-nominated songwriter. Shel Silverstein’s children’s books have sold more than 39 million copies in the U.S. alone and have been translated into 46 foreign languages. You can learn more about Shel and his books by visitingwww.shelsilverstein.com.