DAD and THE DINOSAUR by Gennifer Choldenko / Book Review 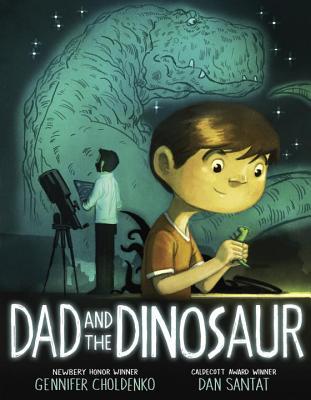 By: Gennifer Choldenko
Illustrated by: Dan Santat
Published by: Putnam
Released on: March 28th, 2017
Ages: 5 & up
Purchase from: Penguin | Amazon
Add it to Goodreads
Rating: 4 Owlets
Thank you to Penguin Random House for provided a copy of this book in exchange for my honest review

A heartwarming father-son story about bravery and facing fears.

Nicholas was afraid of the dark outside his door, the bushes where the giant bugs live, and the underside of manhole covers.  His dad was not afraid of anything. Nicholas wants to be as brave as his dad, but he needs help. That’s why he needs a dinosaur. After all, dinosaurs like the dark, bugs are nothing to them, and they eat manhole covers for lunch (and everything under them for dinner). With his toy dinosaur, Nicholas can scale tall walls, swim in deep water, even score a goal against the huge goalie everyone calls Gorilla. But when the dinosaur goes missing, everything is scary again. Luckily, his dad knows that even the bravest people can get scared, and it’s okay to ask for help facing your fears. It’s just guy stuff.A family classic in the making from the dream team of Newbery Honor-winner Gennifer Choldenko and Caldecott Medal-winner Dan Santat.

Bravery isn't something Nick has without his small toy dinosaur by his side. After a great soccer game, his beloved toy, and comfort gets lost. With it's loss, his feeling of bravery and confidence gets lost too. Thankfully his father understands his young son, and does his best to help him find it. With some determination, Nick and his father retrace their steps and find his toy dinosaurs right where he first got lost.

One of the things I really liked about this story, is the fact that the dad acknowledges his son's fears and worries, and helps him find his dinosaur. In having his father's help, and his acknowledging his son's feelings, it helps create a bond of trust between them. The dad knows his son has the courage, he just has to find it in his own way and time. I think that's a wonderful message for young kids.