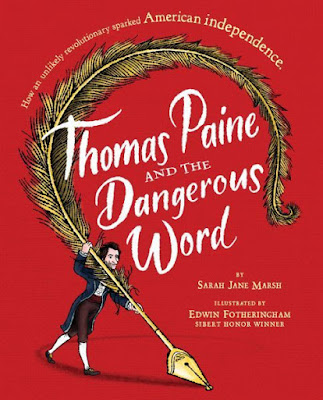 By: Sarah Jane Marsh
Illustrated by: Edwin Fotheringham
Published by: Disney Hyperion
Released on: May 29th, 2018
Ages: 7 & up
Purchase from: Disney | Amazon | B&N
Add it to Goodreads
Rating: 5 owlets
A copy of this book was provided by the publisher in exchange for my honest review

As an English corset-maker’s son, Thomas Paine was expected to spend his life sewing women’s underwear. But as a teenager, Thomas dared to change his destiny, enduring years of struggle until a meeting with Benjamin Franklin brought Thomas to America in 1774-and into the American Revolution. Within fourteen months, Thomas would unleash the persuasive power of the written word in Common Sense-a brash wake-up call that rallied the American people to declare independence against the mightiest empire in the world. This fascinating and extensively researched biography, based on numerous primary sources, will immerse readers in Thomas Paine’s inspiring journey of courage, failure, and resilience that led a penniless immigrant to change the world with his words.

"Inspired by Thomas's unexpected words, America had found her voice."

This is picture book brings a historical figure to life on a level kids will enjoy reading. This book is not just about the revolution that started the American Independence, it's a story about a revolutionary man, Thomas Paine who didn't give up, and who's powerful words forever changed the course of this country. Both history fans, and die hard Hamilton fans will love reading Thomas Paine's story. Complete with a historical timeline, this book is history brought to life and made fun for kids to read about.

I highly recommend picking this book up. It's great for reading aloud. It's also a book that will spark discussions about the events that lead up to Paine writing 'Common Sense', and the revolution that lead to Amercia's independence. It's great for both in home, and classroom libraries. Be sure to look under the dust jacket, as the cover is that of Paine's pamphlet, Common Sense.