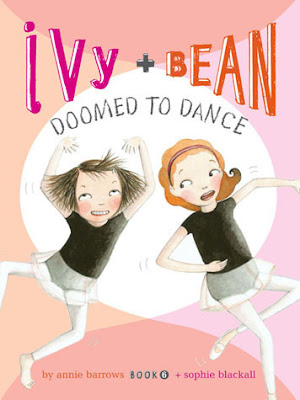 Synopsis of the Series by the Author -
One of the big problems of being a kid is that your parents often try to make you play with people you don’t really like. My parents were forever trying to get me to like the kids of their friends. These kids were often weird. I didn’t want to play with them. It was a problem.

I remembered that when I was writing the first Ivy and Bean. Ivy and Bean are very different. Bean is loud and wild and goofy. She loves to be involved in games and poke her nose in other people’s business. Ivy is quiet and full of ideas. She spends most of her time learning how to be a witch. Each girl thinks the other one is weird. Each girl thinks she could never be friends with the other. Especially because their parents keep nagging them about it.

But sometimes opposites can become the best of friends because they’re opposites. For example, people who like to talk need people who like to listen. And people with great ideas need people who can put those ideas into action. For Ivy and Bean, their differences mean that they have more fun together than they could ever have separately. It also means that, together, they do more wacky things than any one kid could ever dream up. The Ivy and Bean books are about the adventures—and disasters—created by this unlikely team. And since their motto seems to be “Why not?” there’s every reason to believe that their capers and catastrophes will continue for quite a while.

Synopsis of Book 6 - Doomed to Dance
Ooops. Ivy and Bean have made a terrible mistake. They thought that ballet meant leaping, kicking, and cool costumes. Instead, it means they're going to have to be The Two Friendly Squids in a ballet the teacher made up. How embarrassing. As disaster looms, the girls come up with a great escape plan. It's an easy plan, a simple plan, a beautiful plan. It only involves a field trip, a couple of sharks, and some weird animals that glow in the dark.

My almost seven year old daughter was looking for another series similar to the Junie B. Jones books she loved in Kindergarten. Now that she's a sophisticated First Grader, I knew the formula had to include a snarky, funny protagonist. One day at the library, we came across these books. And the stories of two, at first, unlikely friends have literally swept us away.

I encourage parents whose children love characters with spunk who can turn common situations and challenges into a dizzying adventure filled journey, to pick up the Ivy and Bean series. Both you and your child will find yourselves laughing out loud.

Posted by Sophie at 9:55 AM Labels: Annie Barrows, Chronicle Books