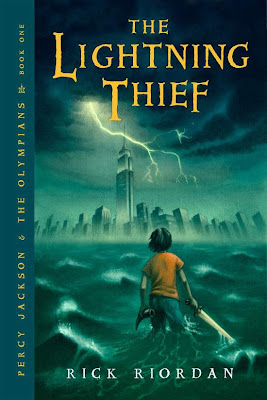 Synopsis - After getting expelled from yet another school for yet another clash with mythological monsters only he can see, twelve-year-old Percy Jackson is taken to Camp Half-Blood, where he finally learns the truth about his unique abilities: He is a demigod, half human, half immortal. Even more stunning: His father is the Greek god Poseidon, ruler of the sea, making Percy one of the most powerful demigods alive. There's little time to process this news. All too soon, a cryptic prophecy from the Oracle sends Percy on his first quest, a mission to the Underworld to prevent a war among the gods of Olympus.


My son and I came across this series as part of his Scholastic Book Order. And as we turned the first few pages, I have to admit that we both were immediately drawn into the world of Percy Jackson. My ten-year-old loved the action and the plot and I adored the well written, 3D characters.

Percy, himself, is so very snarky and determined to find out more about his demi-god status. At every turn in his adventure, he meets more mythical creatures and gets into even more predicaments.

I now also have to admit to a bias, because I look for books that are not only entertaining but will also teach my children something alongside the plot. As we were approaching the end of the book, my son asked if we could get a book on Greek Mythology. Now that made my day. In fact the Percy Jackson Field Guide will be released on January 19, 2010 and you can pre-order it here. This book promises to be the ultimate guide for "gods, monsters and all things Percy."

If you're looking for a book that you can share with your Middle Grader and that both of you will love reading, please, check out the Percy Jackson series. The Lightning Thief is the first in a series of five books outlining Percy's further adventures. And guess what? The movie based on the first book, The Lightning Thief, will be released on President's Day, 2010. Check out the trailer below. It will definitely give you a good idea of the action level and mythology references.