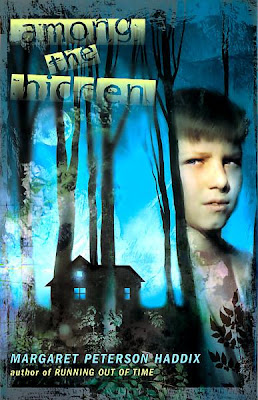 Luke is one of the shadow children, a third child forbidden by the Population Police. He's lived his entire life in hiding, and now, with a new housing development replacing the woods next to his family's farm, he is no longer even allowed to go outside.

Then, one day Luke sees a girl's face in the window of a house where he knows two other children already live. Finally, he's met a shadow child like himself. Jen is willing to risk everything to come out of the shadows — does Luke dare to become involved in her dangerous plan? Can he afford not to?

This was another one of our Scholastic Book Order purchases and one that I looked forward to reading simply because I do adore a good utopian/dystopian tale.

Luke is a third child, therefore he is one of these Shadow Children. He spends his days hiding in the house by himself, avoiding contact with windows or anything that could reveal his existence. After a few days of looking out of his vent, he notices a flickering light in one of his neighbor's windows when he knows that the house should be empty. This new possibility of a Shadow Child living next door is exciting for Luke and when he and Jen meet they form a friendship. But, not for long.

In a series of plot twists, we discover that Jen's father is one of the Population Police and he helps Luke gain a new identity and enroll in a school for the first time. Imagine what that would be like for a twelve year old?

What surprised me the most in reading this book was my ten year old's interest in a society where food shortages exist and the Population Police ensure that no family has more than two children. Perhaps it was the setting which is in the not too distant future or perhaps it's because we have three children in our own family (for the record, the ten year old is the first child, so he would've been safe) that caused him to have an interest in this book. Either way, I was happy because we've had many discussions on whether such a society could exist in the United States and why such laws do exist in other parts of the world.

And I have to admit that any book which causes this level of discussion is a good one in my opinion. But check it out for yourself. This is the first in a series of seven books.
Posted by Sophie at 2:59 PM Labels: Book Review, Margeret Pearson Haddix, Scholastic