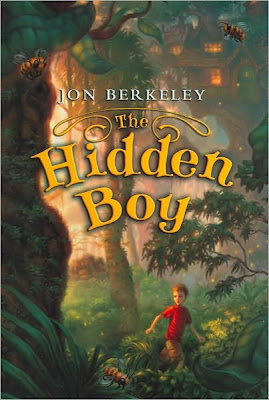 Published By: Harper-Collins
Released: February 2010
Age Range: 8 to 12 years
4 Stars - I really enjoyed reading this book and definitely recommend adding this to your home library.

Synopsis (from Harper-Collins): You are the lucky winner of a Blue Moon Once-in-a-Lifetime Adventure. It’ll be the trip of a lifetime! The tour leaves from the Blue Moon office at 11 p.m. sharp. Groups of seven only. No pets.

When the Flints win the trip to Bell Hoot, they board Captain Bontoc’s Blue Moon Mobile with the expectation of a grand holiday. Then something terrible happens: Bea Flint’s little brother, Theo, disappears on the journey, and the peculiar Ledbetter clan of Bell Hoot, who call Theo the Hidden Boy, is more desperate than even Bea and her family to find him. Bea will have to trust herself and the weird and wise words of an old man called Arkadi in order to find Theo. In her search, she’ll discover that Bell Hoot is more than a vacation destination, a wish is no good unless you give it legs, and Mumbo Jumbo is much more than nonsense—it’s hidden potential that she can find within herself.


A "once in a lifetime journey" offer always has a sense of foreboding. It's like you should know better but for the sake of the journey -- you don't.

When Bea's family accepts the offer things start to go wrong, not when they reach the destination but during the journey. And it goes wrong in a big way -- her brother goes missing. Yes, right in the midst of their trip.

So begins an introduction to a plot that will leave you wrapped up in its lovely imagery. The Hidden Boy explores family ties and the sense that we may all be connected to each other in some mysterious way. Even the isolated villains, The Ledbetters, are connected to everyone else in this magical world created by Jon Berkeley.

What I liked the best was how Bea had the key to solve the mystery of the missing brother and as she explored the strange new world and discovered its inherent magic, she began to unlock the prophecy of the Hidden Boy. Bea is a strong, determined character and one that both middle grade girls and boys will easily relate to and love.

If you like mysteries where families work together through a crisis which would tear most families apart and if you like to explore new mythologies and fantasy worlds, you will love The Hidden Boy. It is a journey filled with family bonds and the thrill of discovering that magic is all around us.
Posted by Sophie at 7:02 AM Labels: Book Review, Harper Collins, Harper Collins Childrens Awesome Adventures, Jon Berkeley, The Hidden Boy 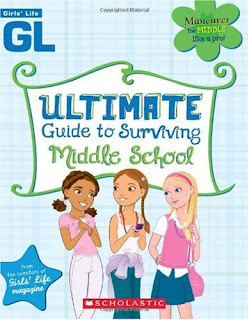 Published by Scholastic
Released April 1st, 2010
3 Stars- Good Read
The Inside Scoop every middle school girl needs to know!
Middle school is fun-and challenging. The Girls' Life Ultimate Guide to Surviving Middle School has the essential info you want on:
* What to expect on the first day
* Making new friends and having fun with clubs, teams and extracurrics.
* Getting great grades.... while still having a life
* And, of course, dealing with guy drama!
This book has all the tips and tricks you need to make your middle school years amazing! We promise! (from back cover)
This was a great book that I will definitely recommend to some friends I have, who's girls are starting middle school. It's full of great tips, and advice from those in middle school or former middle schoolers from everything about your first day, to friends, boys, classes, sports and more. As I read it, I remembered some of the same fears and feelings I had starting middle school.
I really like that the book expresses the importance of just being yourself. I think that is a very valuable thing for preteens and teenagers to remember. This book covers everything you need to know about middle school, without over doing it. There's just enough information to cover the concerns a new middle schooler would have and how to relax and enjoy the middle school journey. I think this will be a great tool for parents in talking to their daughters more about their fears and hopes in starting middle school.
Posted by Mundie Moms at 11:13 PM Labels: Book Review, Scholastic, The Girls' Life Ultimate Guide to Surviving Middle School

6 comments:
Email ThisBlogThis!Share to TwitterShare to FacebookShare to Pinterest 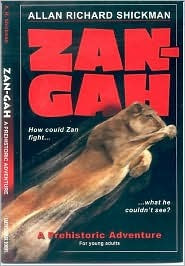 Published by Earthshaker Books
Released July 15, 2007
*Eric Hoffer Award Winning Book*
3.5 stars-good read
Zan-Gah: A prehistoric adventure has only begun. Pressed by love for his brother and a bad conscience, the hero undertakes a quest which leads to captivity, conflict, love, and triumph. In three years, Zan-Gah passes from an uncertain boyhood to a tried and proven manhood and a role of leadership among his people. This dramatic and impassioned story will thrill and deeply move young adults and older readers. They will dream of Zan-Gah at night and remember it all of their lives!-taken from cover
This is a great pre-historic adventure, following Zan-Gah. At a young age he becomes a fierce and respected warrior, as he killed a lioness with just his spear. Zan-Gah, is a journey and a great pre-historic read, one of which I've never read before. The book follows Zan-Gah as he goes in search of his missing twin brother, who's been gone for a couple years, but has started calling out to Zan in his dreams.
The search nearly kills Zan-Gah and isn't without difficulty, as he travels for over a year through tough terrain, and is kidnapped. He's held captive for a year by the Wasp People, who are a tribe greatly feared by Zan's people and other local tribes. Uponhis release, he finds an even more savage tribe, and that's where he finds his brother.
Dael isn't the fun, free spirited brother Zan remembers. After years of captivity and torture, which Dael does not reveal, Zan finds a very broken, lost inside himself, brother. On their long journey home, they find themselves in more trouble, as the Wasp people are ready for war. Zan gained a lot of knowledge in his journey in finding his brother Dael. He learned valuable things from his enemies and from the various tribes he visited on his way. His knowledge is the key in restoring unity among the tribes and defeating the Wasp people in their quest for war.
Allan Shickman's rich detailed, pre-historic world building, left me feeling like I was part of the journey. As a middle schooler, I would have really enjoyed this book. I think teachers and parents teaching their children about the pre-historic era, will really enjoy having this Eric Hoffer Award Winning book.
Posted by Mundie Moms at 7:54 AM Labels: Allan Richard Shickman, Book Review, Earthshaker Books, Zan-Gah 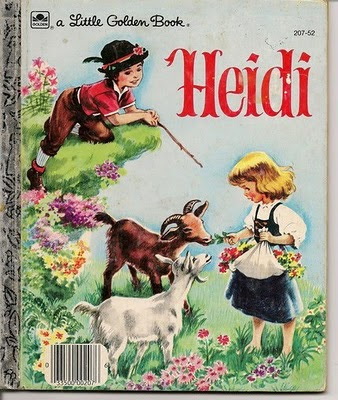 Illustrated by Corinne Malvern
Published by Western Publishing Company, Little Golden Book in 1954,
renewed in 1978, 1982
5 Stars
This is one of those rare finds you get when you walk into a used book store looking for some old kid books. I was so excited to find this! This book is full of amazing pictures, and the story is the perfect length for younger kids. Now this has become one of my daughters' favorite stories to read now.
Heidi grows up with her Grandfather in the Swiss Alps, only to be taken to Germany for a bit to live with her Cousin Clara. There she learns to read and becomes more educated. She also grows very home
sick. Upon becoming quite sick, Heidi returns to her beloved mountain and Grandfather.
Not long after her return, her frail cousin Clara comes to stay with her and her Grandfather. In the fresh mountain air not only helps Heidi, but Clara starts to become healthier than she's ever been before.
While I enjoy the story of Heidi, this book is by far my favorite Heidi book. It's a must have for any fan of Heidi or Golden Books, or both.
Posted by Mundie Moms at 2:58 PM Labels: Book Review, Heidi, Johanna Spyri, Little Golden Books, Western Publishing Company

Scholastic has posted the reveal to The 39 Clues books 9 & 10 covers! 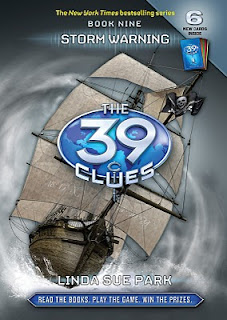 The 39 Clues Book 9: Storm Warning
By Linda Sue Park
Coming May 25, 2010In this thrilling ninth installment, Amy and Dan hit the high seas as they follow the trail of some infamous ancestors to track down a long lost treasure. However, the real prize isn’t hidden in a chest. It's the discovery of the Madrigals' most dangerous secret and, even more shockingly, the true identity of the mysterious man in black. 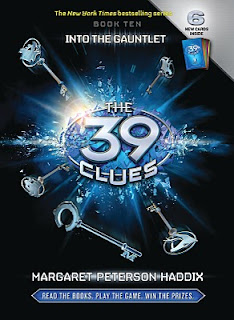 The 39 Clues Book 10: Into the Gauntlet
By Margaret Peterson Haddix
Coming Aug. 31, 2010
Are Amy and Dan ready to face the truth about the Cahills and the key to their unmatched power? After a whirlwind race that's taken them across five continents, Amy and Dan face the most the difficult challenge yet- a task no Cahill dared to imagine. When faced with a choice that could change the future of the world, can two kids succeed where 500 years worth of famous ancestors failed?
You can find out more here:
http://onourmindsatscholastic.blogspot.com/2010/04/39-clues-book-9-and-10-covers-revealed.html
What do you guys think? We can't wait to read them.
Posted by Mundie Moms at 1:31 PM Labels: Scholastic, The 39 Clues Series