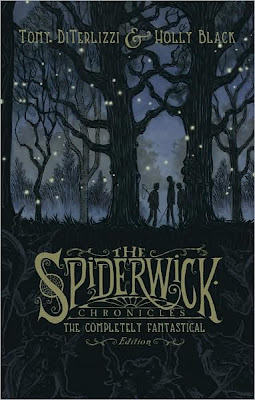 Synopsis: After finding a mysterious, handmade field guide in the attic of the ramshackle old mansion they've just moved into, Jared; his twin brother, Simon; and their older sister, Mallory, discover that there's a magical and often capricious world existing parallel to our own — the world of faerie. Now their entire New York Times bestselling adventure is available in one exquisite volume. Featuring all five books in the original Spiderwick Chronicles series, this handsome edition also includes three recently unearthed bonus chapters; an exclusive "making of" section filled with early sketches of characters like the Grace kids, Thimbletack, and Hogsqueal; and, as a special added bonus, an all-star gallery where other popular artists put their spin on the characters and creatures that populate the world of Spiderwick. Fans and novices alike will treasure this handy, all-in-one introduction to the world of Spiderwick!
I discovered this series three years ago when my son was in Second Grade and I immediately fell in love with it. The original five books : The Field Guide; The Seeing Stone; Lucinda's Secret; The Ironwood Tree and The Wrath of Mulgarath are now packaged in one edition.
The stories follow the Grace children through a series of adventures which were triggered when they moved into an old, decaying house with their mother after their father's recent departure. Like many great children's fantasy novels involving siblings, Spiderwick won't disappoint in its characterizations. The older sister, Mallory, is annoyed with her younger twin brothers, but is also willing to assist them. The two twins, Jared and Simon, have very different personalities but work together when necessary.

Their lives seem fairly ordinary until unexplained things begin to happen. Things that Jared gets blamed for doing. Looking for explanations for the occurrences, Jared starts to explore the old house and he soon discovers a hidden room. Within this room is a piece of parchment and a journal mysteriously titled "Arthur Spiderwick's Field Guide to the Fantastical World Around You".

As strange things continue to occur, the reader is introduced to faeries, boggarts and brownies. And by no means are these ordinary fantastical creatures seen on children's TV shows. They are magical, naughty and dangerous.

If your children like to explore magical worlds and enjoy delicate, detailed illustrations, please check out this wonderful compilation of all five original Spiderwick books. When you are done and are ready for more, you can move onto the Beyond the Spiderwick Chronicles series. The last book in that series, the Wyrm King, was released in September 2009. 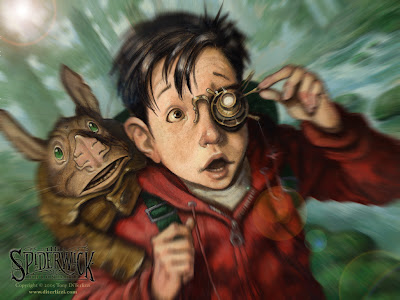 Book Review-Hannah (Daughters of the Sea #1) by Kathryn Lasky

Published by Scholastic
September 1, 2009
310 pages
2 stars
Daughters of the Sea tells the story of 3 mermaid sisters who are separated at birth by a storm and go on to lead three very different lives. Book 1 is about Hannah, who spent her early days in an orphanage and is now a scullery maid in the house of rich, powerful family. She is irresistibly drawn to the sea and through a series of accidents and encounters discovers her true identity. Hannah realizes that she must keep the truth a secret but she also knows that soon she will have to make the choice - to be a creature of the land or the sea. (from goodreads.com)
I received this book to review from Scholastic, and while it was wholesome and a good clean read, I found that there were too many characters that got developed too late in the book. Hannah had a great story that was lost with the development of the other characters, some of whom didn't play a huge role in her story. I felt that the middle of the book should have spent more time in developing Hannah's story, instead of towards the very end of the book.
The middle of the book talked about or had a lot about the family with whom she lived at the early turn of the century. While you get a good understanding of what it was like to be a servant to a very wealthy Boston family at that time, you got very little of the changes that Hannah was going through and she discovers who is she and what she's becoming.
I liked Hannah a lot. She's a great character who like many girls wants to find her place in the world, but stay true to herself and her quest to finding out what the feelings and yearnings she has for the sea are about.
I think this is definitely more for pre-teen girls than teen girls.
Posted by Katie at 7:55 AM Labels: Hannah (Daughters of the Sea Series), Kathryn Lasky, Scholastic