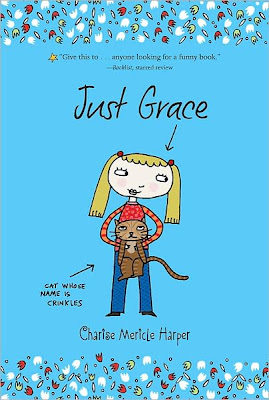 Synopsis - Grace loves cats. She also loves taking pictures of cats and drawing Not So Super comics. She doesn’t like Sammy Stringer, a boy in her class. She’s got lots and lots of ideas, and when her neighbor’s cat goes missing, Grace does her best to make Mrs. Luther feel less lonely. But as the mystery of the missing cat continues, Grace’s well intentioned plan backfires, and she finds herself in a bit of trouble. Maybe, just maybe, Sammy Stringer will help her through.

My seven year old daughter and I picked up this book on a whim. She was looking for something similar to the Junie B. Jones series and well, we came across a well written, hilarious book sprinkled with these silly, little cartoon sketches.

The first in a series of now five books, Just Grace introduces the protagonist, Grace, and her surroundings. From the very beginning my daughter and I loved Grace's characterization because she was nicknamed "Just Grace" by her teacher as a way to identify her from the other three Graces in her class.

As you read on, you realize that Grace is a curious third grader who has a natural sense of adventure. She also has a self admitted super-power, "I can always tell when someone is unhappy, even if that person is pretending to be happy and is a really good actor".

I have to admit that my favorite part of the story was the fact that she had to join forces with her nemesis, Sammy, in order to solve the mystery of the missing cat, Crinkles. Harper captures Grace's witty sense of humor perfectly and her characters leap off the page.

After reading this new book about Just Grace you will know how to . . .
1. turn your favorite potato chips into a tasty chipwich.
2. draw and fold up your very own zine, which is a cool little book made from only one piece of paper.
3. look for and use the special powers of the wish chip.

This book will not help you know how to . . .
1. do fancy hairstyles for your cat.
2. make a flower garden in your room.
3. bake a four- or even five-layer cake.
But this book might make you feel a little bit hungry, and if it does, then you will know you are having a "snack attack" just like Grace!

The Just Grace series is definitely for children who love the precocious adventures of Junie B. Jones, Judy Moody and Clementine. My daughter and I read them out loud, taking turns with each chapter and learning how to emote through Grace's funny dialogue.
Posted by Sophie at 10:33 AM Labels: Book Review, Charise Mericle Harper, Houghton Mifflin Company, Just Grace

Book Review- The Dandelion Fire (Book #2 in the 100 Cupboard Series) by N.D. Wilson

Published by Random House Kids
Released February 24th, 2009
3 stars
Henry York never dreamed his time in Kansas would open a door to adventure—much less a hundred doors. But a visit to his aunt and uncle’s farm took an amazing turn when cupboard doors, hidden behind Henry’s bedroom wall, revealed themselves to be portals to other worlds. Now, with his time at the farm drawing to a close, Henry makes a bold decision—he must go through the cupboards to find the truth about where he’s from and who his parents are. Following that trail will take him from one world to another, and ultimately into direct conflict with the evil of Endor. (taken from good reads).
Dandelion Fire picks up right where 100 Cupboards ended. Henry continues his journey into finding out who he is, but along the way meets some people who either want to claim him as his own or want to show him who he really is.
After a freak accident during a storm out by the barn with Henrietta, Henry is left blind and now he wears the mark of the Dandelion, who's fire burns through him. Henry returns to the cupboards he's forbidden to go in to, to find out what's happening to him and to find his family he can't remember, but he has no idea that Henrietta secretly followed him in. I liked that while most of the story is about Henry and his journey, it's also about Henrietta and her journey in the cupboards as well. Secrets about their grandfather are brought to light, which put Henrietta in almost as much trouble as Henry is in. While both Henry and Henrietta are lost in the world of the cupboards, neither of knows their family has come looking for them.
An evil wizard has his eyes set on Henry and when Henry escapes him, his anger is unleashed and danger comes out of the cupboards, into Henry's home threatening his Uncle, Aunts and cousins. With Henry still gone and no sign of Henriette, and danger now coming out of the cupboards, Uncle Frank knows the only place to take his family is in the cupboards, back to his world.
As Henry continues his journey, he discovers what the Dandelion mark is, is able to over come his blindness, and learns he is the youngest and 7th son. As his journey starts to end, he finds it leads him right to the family he's been looking for, his lost cousin Henrietta, his Uncle Frank, Aunt and Cousins. Henry's family is no ordinary family and now Henry is forced to fight the evil witch and wizard, who are threatening them all. Together with his father by his side, they head off to fight the evil that is plaguing their world.
Dandelion Fire didn't pick up for me until the middle of the book, but once it did, I couldn't read the pages fast enough to find out what was happening. All of my questions I had from 100 Cupboards are answered and Henry finally knows who he is. I liked that N.D. Wilson wove together many of the characters that Henry meets along his way, but doesn't discover who they really are until he meets his family and father. I'm looking forward to The Chestnut King and getting to know more about Henry's family and his place with them.
Posted by Mundie Moms at 8:25 AM Labels: Book Review, N.D. Wilson, Random House Kids, The 100 Cupboads Series, The Dandelion Fire