Book Review-Hailey Twitch Is Not a Snitch 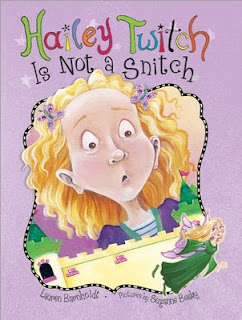 By Lauren Barnholdt
Published by Sourcebooks
Released on May 1st, 2010
4 stars
Hailey is a normal seven-year old girl. Well, sort of. She's normal in a lot of ways. She loves pink sparkly pencils and bending the rules. But Hailey also has a secret: she's friends with Maybelle, a sprite that's visible only to her. And Maybelle is on a special mission to help Hailey have fun.
The problem is that Maybelle keeps getting Hailey into trouble.
Hailey likes having Maybelle around, but soon thing are a big mess. She's about to lose her newest friend at school, and she finds herself being blamed for everything Maybelle does. Will Hailey tell, or will she be able to keep her secret.. and her friends?
This is such a great book for younger readers. Hailey is a typical second grader, who's class is working on World projects. She wants to be partnered with Antonio, a boy in her second grade class. Hailey is partnered with Addie Jokobeck, and Antonio is partnered with Natalie Brice, her competitor at everything. Hailey goes home feeling sorry for herself. She doesn't want to be paired with someone she's not friends with, let alone allow Natalie to be partnered with Antonio. While she's in her room contemplating how to get out of being Addie's partner, she meets Maybelle, a sprite who's been living in her toy castle.
Hailey is the only one who can see Maybelle, and she's not allowed to tell anyone about her. As punishment for something Maybelle has done, she isn't allowed to use magic. She wants to do everything she can to redeem herself so she can return to The Department Of Magic. Once called a rule monger, Maybelle tries to teach Hailey to have fun, but in the process gets her into a lot of trouble.
Hailey is such a fun loving character. She learns she doesn't need to try and be better than Natalie Brice. She learns that being partnered with Addie can be a lot of fun, and in the process she gains a new friend. While Maybelle was the cause for her troubles, Hailey takes responsibility for things she does wrong.
I think this is such a great read. Lauren captured life as a second grader perfectly with her characters Hailey, her friends Addie, Antonio, Russ and even Natalie. What second grade girl wouldn't want to have a sprite living in there room!?!
Posted by Mundie Moms at 5:11 PM Labels: Book Review, Hailey Twitch Is Not A Snitch, Lauren Barnholdt, Source Books

Hailey Twitch Is Not A Snitch Seven-year-old Hailey Twitch knows three things for sure: who she’s the boss of, how to throw a tantrum, and above all, how to get exactly what she wants. But all that changes when Hailey gets paired up with annoying Addie Jokobeck on the class project. No matter what Hailey does, she can’t seem to change her teacher’s mind.

At home, a cranky Hailey is feeling sorry for herself when – poof! — Maybelle, a magic sprite, comes flying out of Hailey’s dollhouse. Maybelle’s on probation with the Department of Magic, and on a special mission to get Hailey to have fun.
The only problem? The invisible Maybelle starts causing a lot of trouble, and when Hailey’s teacher wants to know who’s to blame, Hailey takes responsibility. After all, Hailey Twitch is not a snitch! Now if only Hailey can convince the Department of Magic that Maybelle has reformed…