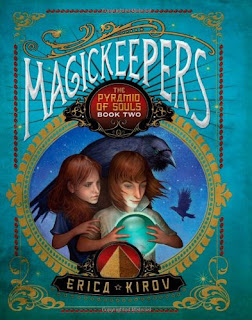 It was stolen from Alexander the Great. To keep it safe, Edgar Allen Poe bargained away his sanity. And somebody suckered P. T. Barnum to get their hands on it. It's the most closely guarded secret in the magician community. And it's missing.

What would you do to protect your family from an ancient pyramid capable of stealing your very soul?

Nick Rostov finally has the life he's always dreamed-and he'll do anything to protect it.

Nick has only now discovered he is part of an extended Russian family of magicians: the Magickeepers. He lives with his eccentric new relatives at the Winter Palace Hotel and Casino in Las Vegas, where they perform daring feats of magic to a packed house. Real magic.

But Nick and his family face a new danger in the form of a stolen relic, the Pyramid of Souls. The tiny pyramid has traded hands many times throughout history. Its power can steal a magician's very soul.

Nick knows who took it: Rasputin, leader of the Shadowkeepers. Using his unique ability as a Gazer-one who can see into the past-Nick enlists his cousin Isabella to help him find it. Soon, the two are hot on the evil sorcerer's trail...until Isabella's soul is trapped by the very relic they're trying to find.

Nick will do anything to rescue Isabella and recover the Pyramid of Souls. But will it be enough to save his family? (from Goodreads)

I hadn't read the first book in the series when I received The Pyramid of Souls, and was still able to get into the story. I think Erica did a great job by giving enough back story from what happened in the first book to follow Nick's journey in this great sequel.
Nick is still struggling with learning his Russian heritage. He's having a hard time with learning what his tutor Theo is teaching, and most importantly, he feels he's not living up to being a great Magician like his cousin Damian is training him to be. Damian, after all is the greatest Magician in the world. His cousin Isabella is even a great Magician in her own right.
Nick lives on the top three floors of The Winter Palace Hotel in Las Vegas, NV with the rest of his Magician family, who's very proud of their Russian Heritage. They perform real Magic shows and the greatest show of all is about to take place as Magicians from around the world are getting ready to descend on The Winter Palace for the chance to gain, The Greatest Magician in The World bragging rights.
When someone steals the Pyramid of Souls, Nick must help to get it back. It's been sot after all through out history as, Alexander The Great had it stolen from him. Edgar Allen Poe pledged his sanity to keep it safe. P.T. Barnum lost it in a bet against a Magician and now the most guarded, most sacred secret in the Magician world has been stolen. It wasn't stolen by anyone. The Shadowkeepers are back, and this time they won't stop until they have Nick. Nick is the Magician's only hope is getting it back, but at what cost?
Swept away in a wonderful world full of Russian-lore, magic and family ties, I think this is a wonderful sequel in The Magic Keepers series. I'm looking forward to reading the next book in the series.
You can learn more about the series here http://www.magickeepers.com/
Posted by Mundie Moms at 8:04 AM Labels: Book Review, Erica Kirov, Sourcebooks Jaggerjay, The Magic Keepers Pyramid Of Souls