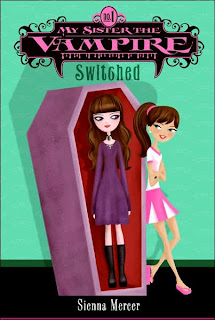 By: Sienna Mercer
Published by: Harper Collins
Released on: July 24, 2007
Age Range: 8 to 12
Synopsis (from Harper Collins): When Olivia Abbott moves to town, she's excited to join the cheerleading team and make new friends. Then she meets Ivy Vega. At first, Ivy, pale and dressed all in black, looks like Olivia's opposite. Then the girls look beyond the glittery pink blush and thick black eyeliner to discover they're identical—identical twins!

Olivia and Ivy are brimming with plans to switch places and pull every twin trick in the book. But Olivia soon discovers that she and Ivy aren't exactly the same. Ivy's a vampire. And she's not the only one in town.
I read this with my 7.5 year old daughter who is, I have to admit, rather caught up with the fact that her mother reads YA Fantasy books. Finally, I felt like I found a story that she could enjoy and that was appropriate for her age level.
I loved the Parent Trap-like theme combined with fantasy. One sister tries out for cheerleading. The other is, well, she's not your average goth. Can they figure out why one is a vampire and the other is not? And why do they have those matching emerald rings? It's a funny, page turner that will keep both your tween and yourself amused.
And if your tween is anything like my daughter, rest assured there are more books. This is the first in a series of four. A perfect series to add to your Summer Reading List.
Posted by Sophie at 10:04 PM Labels: Book Review, Harper Collins, My Sister the Vampire: Switched, Sienna Mercer