By Gordon Korman
Published by Scholastic
Released on April 8th, 2010
Source: Scholastic
4 Stars- Great read
One belief has sustained fourteen year old Amy Cahill and her younger brother, Dan, on their hunt for the 39 Clues: They are the good guys. But then a shocking discovery about their parents shatters everything Amy and Dan think they know, dividing the two siblings for the first time ever. When Dan disappears in a country of more than a billion people, Amy has to make a terrible choice-find the next clue...or find her younger brother. (taken from the cover)
Continuing with the great adventure of finding the 39 Clues, Amy and Dan find themselves divided and separated in China. For the first time Amy and Dan find themselves at odds over the belief of who their parents really are, which leads to a rash decision as one of them runs away.
I like that no matter which author writes the next book, the voices stay the same and the adventures keep getting better and better. The clues are just as well hide and putting the puzzle pieces together is just as frustrating as it is for Dan and Amy. Just as I think I have it figured out, I'm thrown for a loop. That's one of the things that keeps me reading.
The stakes are getting higher and higher as more family members are entering the game. I liked the history of China that was presented in this book. I think that fans of The 39 Clues will really enjoy book 8. I feel like I'm missing an a clue that's right under my nose and I'm looking forward to reading book 9.
Posted by Mundie Kids at 7:22 AM Labels: Gordon Korman, Scholastic, The 39 Clues, The Emperor's Code book 8

Book Review - The Land of Narnia 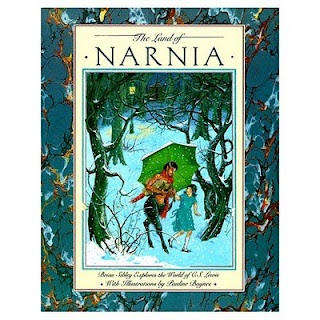 By: Brian Sibley Explores the World of C.S. Lewis
Illustrated By: Paulne Baynes
Published by Harper & Row
Released on September 15, 1990
Age Range: 9-12 years
5 Stars- This is one book I will read again & again.

If you love the world of Narnia as much as I do be sure to check out your local used bookstore or library for this little gem. It's available at most of the major online retailers (here and here).

This picture-book-sized volume contains gorgeously illustrated summaries of all seven books. But it also gives a great glimpse into C.S. Lewis and his inspiration for writing Narnia. Brian breaks the book up into logical chapters: the founding of Narnia, the stories of Narnia, the land of Narnia and the folk of Narnia. He also goes a little deeper by explaning the meaning of Narnia as well as its ongoing appeal.

I bought this volume to read the summaries and enjoy the pictures with my Kindergartener. But I have to admit to reading it myself rather late into the night. And being swept away by Lewis' inspiration. Here's the letter he wrote to his goddaughter:

My Dear Lucy,
I wrote this story for you, but when I began it I had not realized that girls grow quicker than books. As a result you are already too old for fairy tales, and by the time it is printed and bound you will be older still. But someday you will be old enough to start reading fairy tales again. You can then take it down from some upper shelf, dust it and tell me what you think of it. I shall probably be too deaf to hear, and to old to understand, a word you say, but I shall stil be your affectionate Godfather.

I am that Lucy every time I pick up these books. I was the little girl who loved them and now I'm the mom who dusts them off the top shelf and reads them with her children. If you're at all like me be sure to check out this wonderful exploration of C.S. Lewis' Narnia.
Posted by Sophie at 7:03 AM Labels: Book Review, Brian Sibley, C.S. Lewis, Harper Collins, The Land of Narnia