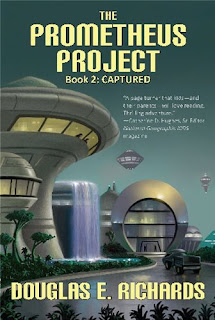 By: Douglas E. Richards
Published By: Paragon Press
Released: September 2007
Source: For Review from Author
Ages: 8-12
Rating: 4 Stars
Included in The California Department of Education’s Recommended Literature for Science and Math and in Missouri State University’s Best New Books to Engage Students in Math and Science This fast-paced, science fiction adventure is a stand-alone sequel to The Prometheus Project: Trapped. Along with their scientist parents, the brother-sister duo of Ryan and Regan continue their exploration of a fantastic alien city built deep underground. When the city is captured by a ruthless alien—with unknown capabilities and diabolical plans—and his band of mercenaries, the adult members of the team are taken hostage, and the siblings remain the team’s only hope. To save the adults, Ryan and Regan must outwit the brilliant alien and his well-trained force, free the prisoners, and thwart a seemingly unstoppable invasion. Crammed with cliffhangers, nonstop action, and unexpected twists and turns, this novel introduces scientific topics—sound and hearing, ultrasonic sound, experimental methodologies, flashpowder, human memory, and superconductivity—to children while engaging their imaginations.

Although Captured is the second book of The Prometheus Project series by Douglas E. Richards it can easily be read as a stand alone. Aimed at middle aged reader from the ages 8-12, this is the perfect book for children who are interested in Science and like Science Fiction. The children in this book use their brain instead of their brawn. They analyze, ask questions, make connections and reason things out to solve the problems they face.

Captured held my interest throughout. It is a faced paced read that was both entertaining and fun to read. Filled with action and adventure this book is sure to delight readers whether young or old.
Posted by Kathy Habel at 12:21 PM Labels: Book Review, Douglas E. Richards, Paragon Press, The Prometheus Project: Captured

Description from GoodReads:
This is the story of how young Zeus, with a little help from six monsters, five Greek gods, an enchanted she-goat, and his mother, became god of gods, master of lightning and thunder, and ruler over all. in doing so, he learned a lot about family. Who knew that having relatives could be so complicated, even for a god?
Brian Karas says about his inspiration for this book, "I've been interested in working with myths, but I felt as though I needed a personal connection. I am of Italian and Greek descent so I started to think of my Greek heritage. But the world of Greek mythology was unknown to me and in a way felt inaccessible, until I learned more. The Greek believed their gods and goddesses to be, among other things, very human-like in their emotions and behavior. They had complicated family relations. They were flawed on many levels - they could be petty, impulsive and unreasonable. I started to recognize them. Then I travelled to Greece, I knew this place! This personal connection gave me what I felt I needed to work with a Greek myth. But which?

"I am also interested in the beginnings of things. When I started researching I kept looking for the ultimate source, the very first account, and largely drew from Hesiod's Thegony. Being interested in origins, I was also drawn to the Greek's version of the very beginning of things and it was here that I settled on the story of Zeus. There is much written about his reign as ruler of heaven and earth but very little about his youth and rise to power. The story of how his mother hid him on the island of Crete is a familiar one but there was a big gap in everything I read of what happened in between his life as an infant and his glory days. Young Zeus is my account of how things might have gone for young Zeus and what led him to become the omnipotent almighty god that he was believed to be."

When I came upon this book, I wasn't sure what I was expecting but I wasn't expecting it to make me laugh. I was also curious to see how Karas would create a picture book about Zeus that young children could connect with. After reading this story, I can honestly say that Karas both made me laugh and did a wonderful job developing a story about Zeus' early years in a way that younger children will be able to understand.

As noted in Karas's explanation of how he created the story, there is little known of Zeus' early life other than his mother hid him as an infant. However, the author works to provide a plausible account of those early years, as well as, to introduce children to various characters (gods & goddesses) in Greek Mythology. There is a cast of characters in the beginning of the book for reference purposes which I skipped initially but found myself going back to at the end.

Children will enjoy the various antics that Zeus gets into but more importantly how he rescues his brothers and sisters and then declares himself in charge. Young children who live with older siblings will especially enjoy this part of the book.

One of my favorite scenes in the book is when Zeus rescues his siblings:

The illustrations show them all walking around after having been spewed out of Cronus's stomach. Maybe it was the mood I was in but it just seemed to capture the humor of the story.

I gave this a 5 star rating because as an educator I feel it would make a nice addition to both a personal library and a classroom library. Additionally, I love that this can be used from Kindergarten to Grade 5.
Posted by Alyson Beecher at 7:00 AM Labels: Book Review, G. Brian Karas, Scholastic Press, Young Zeus