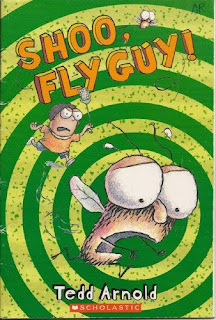 Description from Goodreads:
Fly Guy returns home to discover that Buzz has gone on a picnic without him! Sad and hungry, Fly Guy takes off in search of his favorite food. He gets shooed away from a hamburger, a pizza, a dog's bones, and even roadkill--leaving readers to guess what Fly Guy's favorite oozy, lumpy, smelly, and brown food could possibly be! Why, it's shoo-fly pie, of course!

The Fly Guy books by Tedd Arnold are a series of easy to read picture books that all my kids enjoy.

Shoo, Fly Guy! is a fun book to read despite being quite gross! Little boys will love it. There is lots of repetition and it's a quick easy read my kids ask me to read over and over.
Posted by Kathy Habel at 8:22 PM Labels: Book Review, Scholastic, Shoo Fly Guy, Tedd Arnold

Description from GoodReads:
JAMIE THINKS HER FATHER CAN DO ANYTHING....UNTIL THE ONE TIME HE CAN DO NOTHING.
When twelve-year-old Jamie Dexter's brother joins the Army and is sent to Vietnam, Jamie is plum thrilled. She can't wait to get letters from the front lines describing the excitement of real-life combat: the sound of helicopters, the smell of gunpowder, the exhilaration of being right in the thick of it. After all, they've both dreamed of following in the footstepsof their father, the Colonel.
But TJ's first letter isn't a letter at all. It's a roll of undeveloped film, the first of many. What Jamie sees when she develops TJ's photographs reveals a whole new side of the war. Slowly the shine begins to fade off of Army life - and the Colonel. How can someone she's worshipped her entire life be just as helpless to save her brother as she is?

From the author of the Edgar Award-winning Dovey Coe comes a novel,both timely and timeless, about the sacrifices we make for what we believe and the people we love.

I have just been stumbling on to some wonderful Middle Grade books lately and SHOOTING THE MOON is no exception. I am not sure if this is officially considered "historical fiction" (I may need to check with some librarian friends) but since the book takes place in 1969 during the Vietnam War I have chosen to categorize it as historical fiction. One of the things that I love about this story is that though is takes place 41 years ago, there is something timeless and true about the book.

Jamie Dexter is an almost 13 year old (she keeps reminding us of this important fact) and the daughter of an Army Colonel. She was born in Germany at an Army base, and has lived her whole life on Army bases and amongst soldiers. Jamie and her older brother TJ have played war games, and accepted what their father says about the Army without any questions. This pro-Army sentiment has caused her brother TJ to enlist even before attending college and medical school. Jamie is puzzled at her father's, an Army Colonel, attempts to persuade TJ to change his mind and go to college instead. However, TJ is determined to help now and is being sent as a medic to Vietnam.

A significant portion of the story is revealed as Jamie's brother sends home letters to her parents but only rolls of film for her to develop. With the assistant of another solider on base, Jamie learns to develop the pictures. Through the letters, Jamie begins to learn that the war may not be exactly what she thought it was. At the same time, Jamie learns about her father's real reasons for not wanting TJ to enlist.

This coming of age story looks at what happens when a child learns that her parents can not do everything. Despite the seriousness of the topic, and the reality of the war, the book has a message of hope and a very appropriate ending. I believe my students will really like this one, and I can't wait to share it with them in the fall. This is one book that I would also highly recommend the audiobook as well as the written format. Both are equally wonderful.
Posted by Alyson Beecher at 7:00 AM Labels: Atheneum, Frances O'Roark Dowell, Shooting the Moon