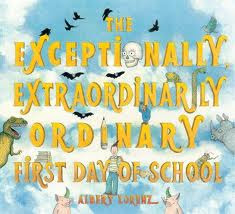 Author/Illustrator: Albert Lorenz
Publisher: Abrams Books for Young Readers (August 1, 2010)
Reading Level: 4 to 8 years old (but I would recommend it for the older end of this age level)
Source: Personal Copy
Rating: 3.5 stars

Description from GoodReads:
On the first day back to school from summer vacation, John is the new kid. When the librarian asks him if the school is any different from his last one, he begins a wildly imaginative story about what it was like. What follows are hilarious scenarios—his old school bus was a safari jeep pulled by wild creatures, the school was a castle, and the lunch menu included worms! His imagination wins him the attention and awe of his librarian and peers, setting the tone for a compelling story about conquering the fears of being a new kid, as well as the first-day jitters that many children experience. Albert Lorenz’s over-the-top illustrations, reminiscent of the work of MAD magazine’s early artists, bring the story to life. Speech bubbles and side panels make reference to and define objects in the art (in the most humorous and irreverent way).

Every year, I look for a few new picture books to celebrate the first day of school. When I was at my local indie bookstore recently, I came across Lorenz's The Exceptionally Extraordinarily Ordinary First Day of School. The title caught my eye. It sounded lively or boisterous. There was also an odd quality to the cover illustrations which piqued by curiosity.

Upon entering the story, I was bombarded with a variety of text and complex illustrations that filled the pages. It caught my attention, but I almost felt overwhelmed. There was story text, speech bubbles that supported the story, and on every right-hand page there was a list of vocabulary words with their definitions. As I read through, I realized that each picture was really two layers. The surface illustration that represented the environment that the child was physically in or describing and then the visual representation of John's (the main character) imagination.

It is important to understand that John is a new student at school. Mrs. Dewey, the librarian, is asking the students how they like the new murals and inquires of John how he is liking his new school. As I read through, I realized that the author was attempting to use this story as an example of how one child chose to cope with the nervousness of being a student at a new school.

As mentioned earlier, the illustrations are somewhat odd. The GoodReads description alludes to similarities with Mad Magazine's early work and I would agree. There is a certain level of humor and irreverence that older children will enjoy. However, I believe that this will be a book that will be met with mixed reviews. Though I gave it a 3.5 rating, I am really undecided. If you do see it though, check it out and tell us what you think.
Posted by Alyson Beecher at 5:00 AM Labels: Abrams Books for Young Children, Albert Lorenz, First Day of School