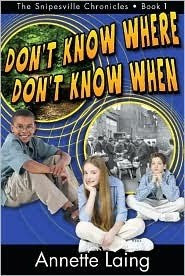 
What a nightmare. Hannah Dias, California Girl with Attitude, and Alex, her laid-back brother, have moved from exciting San Francisco to boring Snipesville, Georgia. Life doesn't improve when they meet Brandon, a dorky kid who is plotting his escape from the Deep South, and the weird Professor, who has a strange secret.

Suddenly, the kids are catapulted thousands of miles and almost seventy years to England during World War Two.

They fall into a world of stinging nettles, dragon ladies, bomb blasts, ugly underwear, stinky sandwiches, painful punishments, and non-absorbing toilet paper. They learn so much more than they could ever learn in a history class. Not that they want to learn it.

But they can't go home unless they find George Braithwaite, whoever he is, and whatever it is that he has to do with Snipesville.

The introduction to this book had me laughing:

The Second World War began on September 1, 1939, when Germany invaded Poland. Too many Germans had lost their minds in the 1930s and decided that Adolf Hilter was their ideal leader. Hitler was a nasty little man with a silly moustache, who spent a lot of his time and energy hating people he didn't know, and thinking of ways to kill them. But I bet you knew already knew that.

This is a good book to use to help children understand what life was like for those who lived during World Wars I & II. From the way children were treated, to the toilet paper they used, to the food and clothing they had, to what a visit to the dentist was like, this book made me grateful for the world we now live in.

It took me a long time to get into this book. The first half I had no emotional connection to the characters and considered putting the book aside. Thankfully I continued because I enjoyed the second half of the book. The story came together and began to draw me in as the mystery unraveled and was solved. I liked the character Mrs. Devenish and her interactions with Hannah & Alex.

Marketed to children ages 9 and up. There were a few mild expletives I felt should have been left out since this is aimed at younger readers.

It's probably not a book my 8, 10 or 12 year old would read on their own but a book I would recommend be used to supplement a study unit on World War II.
Posted by Kathy Habel at 11:05 AM Labels: Annette Laing, Book Review, Confusion Press, Don't Know Where Don't Know When