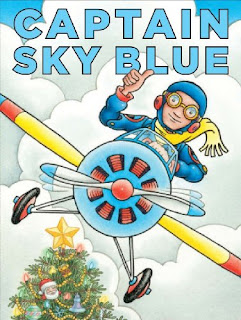 Story & Pictures by Richard Egielski
Published by Scholastic
To Be Released September 2010
Source- Scholastic
3 stars- This is a good read!
Santa brings Jack his best toy pal, Captain Sky Blue, a pilot. Sky speak in pilot talk ("Roger! Wilco!"). After a thunderstorm separates Sky and his buddy ("Mayday! Mayday! Mayday!"), Sky is abducted by a whale, then left alone to wander the frigid ocean floor until he chances upon a very special place, a place where he's been before ("Now I'm spooled up!"). Captain Sky Blue thinks he has finally found an easy way home, but first he must help Santa out on Christmas Eve- a challenge that put his pilot skills to the test. (taken from books cover)
This is such a delightful read that younger kids and especially those who love planes will really enjoy. Young readers will love going on an adventure with Captain Sky Blue, as he tries to find his way home to Jack. Captain Sky Blue loves his best pal Jack, his blue and yellow plane and flying. When Captain Sky Blue becomes lost in a thunderstorm, and finds he's far away from home, he sets out to find a way to return home.
On his journey home, he finds himself back at Santa's workshop. Santa needs his help! Will Captain Sky Blue be able to help Santa? Will he ever be reunited with Jack? Be rest assured, Captain Sky Blue will do all that he can to help Santa and return home to Jack. This is a delightful read, with great illustrations. I love that there's a page with definitions for all of Captain Sky Blue's pilot talk. This is a great book to read not just for the holiday season, but all year long.
Posted by Mundie Kids at 9:32 PM Labels: Book Review, Captain Sky Blue, Richard Egielski, Scholastic

Lerch is one sassy, snazzy fish who seems to have it all: good looks, charm, a great sense of humor, and a perfect smile. But he's lonely (the bubbles and the pebbles ain't talkin'!) and wants to find a friend. But where? Then, with the help of an unexpected "admirer," Lerch meets Dinah, and it's true love from first glance.

Yes, I know. Summer is almost over, school is about to begin but it is 100 degrees out and technically we have several more weeks before fall is officially here. So I have a couple of fish/ocean related reviews coming. First up, Swim! Swim! by Lerch.

Lerch is lonely. He is looking for a friend, but a fishbowl is somewhat restricted. His attempt to speak to the pebbles, and the man in the deep-sea diving outfit fail miserably. Lerch then finds bubbles, despite talking "bubble", he still has no luck. The bubbles pop and disappear. So what is a lonely fish to do? When he is introduced to Dinah (another fish) will the friendship last or will there be fish on the menu.

This book is funny. I loved the cartoon/comic book style of the illustrations. They are bright, bold and interesting and the facial expressions on Lerch communicate even more. The text is written in word bubbles and provide an almost rhythmic pattern to the story. Young and old readers will have fun with this story.

Take a moment to enjoy the remaining days of summer and pick up Swim! Swim! for a fun read. Tomorrow I will share another fish story that readers will enjoy.
Posted by Alyson Beecher at 7:02 PM Labels: Book Review, Lerch, Scholastic, Swim Swim