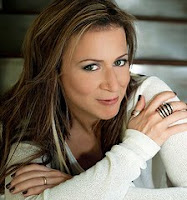 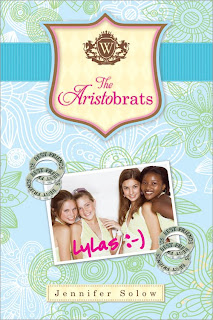 To celebrate today's release of The Aristobrats, we have Jennifer Solow on our blog today!!
Which of your characters would you have been the closest with in middle school?
I probably would have been closest with Allegra, actually. I see Allegra as a lot more than she appears to be (she’s a key character in the next Aristobrats, which I’m working on now). I think it would be fun to have a sleepover with her and realize she’s good at something unexpected, offbeat and interesting – to find out, despite my preconceived notions, that she’s really fun to hang out with.
Who or what inspired you to write?
In 2001, I was sitting in a business meeting in downtown Manhattan when the World Trade Center collapsed. I was just a few blocks away – close enough to see things I’ll never forget. The experience made me grateful to be alive and asking myself the question: If I was in one of those buildings, did I do everything I wanted with my life? The answer was no.
Within a month I had left my 20-year career behind and took my first writing class. An assignment I started in that class went on to become a national bestselling novel.
In three words, how would your characters describe you?
Hopeful, tenacious, messy
What is one thing you must have when you're writing?
A big thermos of piping hot Hojicha tea.
Who's one of your favorite literary characters and why?
The first that popped into my mind was Nick Carraway from The Great Gatsby. I see Nick as slightly floating on the edge of the scene, observing, participating, desiring that something unattainable. He’d like to be Gatsby, or at the very least, get to know him and be around his dazzling aura – but he’ll never be Gatsby. Is it better to be the mythic, ethereal guy who winds up dead in the end, or the neighbor, the regular guy, who’ll probably live out his life wishing he could have been someone else?
Just for fun, did you know that Jennifer....
* Owns a Tractor
* Makes her own goat cheese & bakes bread nearly every day.
* Met her husband in the ashes of the World Trade Center
* A real vampire threatened to spank her on her 30th Birthday
(all used with permission from Jennifer)
You can get to know Jennifer more, by visiting her site here:
http://www.jennifersolow.com/
Read an excerpt of The Aristobrats
http://www.jennifersolow.com/the-aristobrats/
Watch the video trailer
http://www.youtube.com/watch?v=hIDoIA7XivM
Which Aristobrat Are You? Take the quiz.
http://www.jennifersolow.com/the-aristobrats/
Follow Jennifer on Facebook
http://www.facebook.com/#!/pages/Jennifer-Solow/139693322731542?ref=ts
Don't forget to LOOK for this image on Jennifer's site to find her SECRET PAGE!

Thank you so much to Jennifer and Sourcebooks for your time!!
Posted by Mundie Kids at 7:23 AM Labels: Author Interview, Jennifer Solow, Sourcebooks Jaggerjay, The Aristobrats 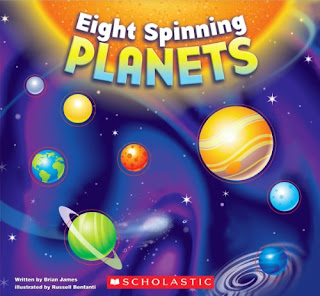 By Brian James
Illustrated by Russell Benfanti
Published by Scholastic
Released on September 1st, 2010
Source- Scholastic
Ages 18 months and older *Ideal for Preschool and Kindergartners*
5 Stars- A definite must have for younger readers and space adventurers
Get set to explore the solar system one planet at a time! Counting backwards from Mercury to Neptune, EIGHT SPINNING PLANETS features innovative die-cuts throughout to reveal realistic, touchable planets on every spread that disappear one by one with each turn of the page. Young readers will love discovering simple facts about the planets as they feel their way through the sturdy pages of this book. An excellent and playful introduction to the solar system!
Both my Preschool and Kindergarten ages kids have enjoyed this book. It's bright colors and realistic, touchable planets make this a very engaging read. With simplistic descriptions and a real picture of each planet, young space explorers will feel like they've taken a brief trip around our solar system.
I think 8 Spinning Planets would be a perfect fit for both preschool and Kindergarten curriculum, as well as for your child's personal home library.
Posted by Mundie Kids at 6:32 AM Labels: 8 Spinning Planets, Book Review, Brian James, Russell Benfanti, Scholastic