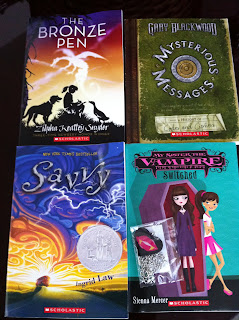 I adore getting a Scholastic Book Club order form in my kid's backpack. And I consider myself lucky because I have a Kindergartner, a Second Grader and a Sixth Grader so we get a nice variety of books to choose from on our orders.
This time around my 11 year-old son got his order in and he chose some interesting books that I can hardly wait to wrestle away from him:
The Bronze Pen by Zilpha Keatley Snyder: She wrote one of my all time favorite middle grade books, The Egypt Game and it's nice to see yet another story by her.
Synopsis - Twelve-year-old Audrey Abbott dreams of becoming a writer, but with her father's failing health and the family's shaky finances, it seems there is no room for what her overworked mother would surely call a childish fantasy. So Audrey keeps her writing a secret. That is, until she meets a mysterious old woman who seems able to read her mind. Audrey is surprised at how readily she reveals her secret to the woman.
One day the old woman gives Audrey a peculiar bronze pen and tells her to "use it wisely and to good purpose." It turns out to be just perfect for writing her stories with. But as Audrey writes, odd things start happening. Did Beowulf, her dog, just speak to her? And what is that bumping under her bed at night? It seems that whatever she writes with the pen comes true. However, things don't always happen in the way that she wants or expects. In fact, it's quite difficult to predict what writing with the pen will do. Could the pen be more of a curse than a gift? Or will Audrey be able to rewrite the future in the way that she wishes---and save her father's life?
Mysterious Messages by Gary Blackwood: My son and I both loves stories about spies and codes, so this is definitely going to be a good read for the two of us. And the book has a gorgeous format as well as layout -- it looks like an old journal which is harboring the best of secrets.
Synopsis: Many books present readers with codes to crack and puzzles to solve, but this excellent narrative history of cryptography explains who developed the different systems of encryption and why—and who managed to crack the codes. Blackwood offers an accessible and often funny lesson in alternative history that features many names that readers will know (Julius Caesar, Queen Elizabeth I, and Thomas Jefferson, to name a few), as well as those who worked behind the scenes to create what they hoped were unbreakable ciphers. Wherever matters of national security were at stake, cryptography played a major role, and perhaps the most interesting lesson is that many landmark events would have turned out differently had it not been for cryptographers working on both sides to create and break the other side's secret messages. Blackwood provides challenging examples of each type of cipher for readers to try. The book's clever and appealing format, designed to look like a secret notebook of torn pages, photographs, and sketches taped to the pages, complements the subject perfectly.
Savvy by Ingrid Law: This has been on my TBR for a while and it came as a Two-Book Fantasy Pack along with The Bronze Pen. There is a sequel, Scumble, which was released on August 17th.
Synopsis: For generations, the Beaumont family has harbored a magical secret. They each possess a "savvy" — a special supernatural power that strikes when they turn thirteen. Grandpa Bomba moves mountains, her older brothers create hurricanes and spark electricity... and now it's the eve of Mibs's big day.
As if waiting weren't hard enough, the family gets scary news two days before Mibs's birthday: Poppa has been in a terrible accident. Mibs develops the singular mission to get to the hospital and prove that her new power can save her dad. So she sneaks onto a salesman's bus... only to find the bus heading in the opposite direction. Suddenly Mibs finds herself on an unforgettable odyssey that will force her to make sense of growing up — and of other people, who might also have a few secrets hidden just beneath the skin.
My Sister the Vampire, Switched #1 by Sienna Mercer: This is a book that I reviewed here but as sometimes happens, my daughter allowed someone to borrow it and, well, it wasn't returned. It helps to have a big brother who has a cool Scholastic Book Order Form where not only can you get the book that was lost but also a matching necklace. My daughter was squealing happily as my son pulled both items out of his backpack. Yes, he did it a little reluctantly but he's a good kid so he did order for his sister.
And guess what else came with the books? That's right! A new order form. This one has the new Wimpy Kid book as well as the new Rick Riordan book. Now you know what we'll be ordering next time. What have you ordered from SBC lately??
Posted by Sophie at 5:02 PM Labels: Gary Blackwood, Ingrid Law, My Sister the Vampire: Switched, Mysterious Messages, Savvy, Scholastic Book Orders, Sienna Mercer, The Bronze Pen, Zilpha Keatley Snyder 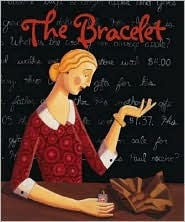 Teddy is not Miss Thompson's favorite student. He doesn't focus in class, his homework is never complete, and he comes to school unkempt. When, at Christmas, Teddy gives Miss Thompson a bottle of cheap perfume and a rhinestone bracelet with half the stones missing, Miss Thompson is confused-until she discovers that these items had belonged to his recently deceased mother. Miss Thompson's profound realization changes her attitude and behavior forever; in turn, young Teddy begins to truly blossom. The Bracelet is a heartwarming story of how one person can deeply affect another person's life, and it will touch everyone who reads it.

What a beautifully done, touching book. I've heard this story before but it still made me cry. Gorgeous illustrations accompany the retelling of this classic story.

This book would make a great gift for a teacher who has touched your child's life. It illustrates how a teacher can open a world of possibilities for a struggling student. Also a good lesson it not judging others because we don't know what they've been through.