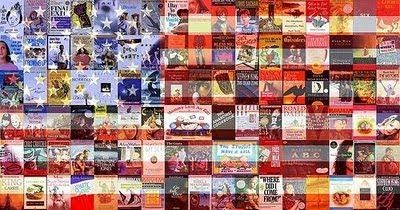 Today marks the start of the 2010 banned books week.

Most children's books escape being found on a banned books list that typically reserves places for controversial young adult and adult books. Once in a while a middle grade book finds its way on to the list and even an occasional picture book, such as The Lorax by Dr. Seuss.

Before I go on I want to share my opinion...and that is all this is, my opinion. I believe it's my responsibility as a parent to know what my children are watching, playing and reading. I believe in age appropriateness when it comes to books, movies and video games. Take the recent controversy over the book Speak. I'm a fairly conservative reader and I've read Speak. It's a well written, powerful book, but I wouldn't allow my daughter to read it at this point in her life. It's not age appropriate for my 10 year old. If asked I would object if it were on the library shelves at our elementary school. However I feel Speak is a book that would be appropriate on the shelves of a high school.

I'm not a fan of strong language, graphic sex and gory violence in books, movies or television. There are many books I have put down or decided not to read due to their content. I'm not saying those books should be removed from a public library, but I am saying it's my right as an informed reader to choose the books I will and won't read. That's not censorship, that's making a choice.

I personally believe that every book has its place, but not every book is appropriate for every shelf.

Now on to the banned book The Lorax by Dr. Seuss. 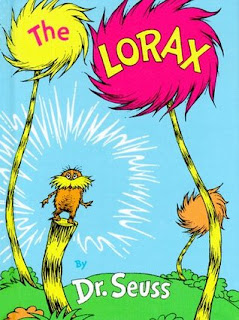 Once in a while a book banning makes me scratch my head. Why in the world would a book such as the Lorax by Dr. Seuss be banned? I read this to my daughter not even a month ago and could find no reason for it to be a banned book.

From 50 Banned Books that Everyone Should Read:

The Lorax by Dr. Seuss. On the surface this book seems it should be included in the Protect the Children section, but the reason this Dr. Seuss book is banned has more to do with adult issues. The book is an allegorical story describing the effects of poor stewardship on the Earth. Those opposed to the book, specifically some in California, feel it shows an unfair portrayal of those in the logging industry.

An unfair portrayal of the logging industry as a reason for banning The Lorax? That's taking things a little too far if you ask me.

Instead of trying to ban a book for such a ridiculous reason why not put a book to good use. An article in USA Today tells of something constructive being done in conjunction with Dr. Seuss's book The Lorax.

The book is being reprinted with a special environmental message that describes "The Lorax Project," which is being launched today in honor of Earth Day. Ten percent to 15% of profits from the book and from Earth-friendly consumer products featuring the Lorax's image will be used to stop deforestation in Madagascar, Brazil and China.

I do wonder why critics even try to ban a book. Attempting to get a book banned brings attention to that book. People who might never pick up the book flock to the title because of the controversy.

So enough of the book banning. Allow people the freedom to read what they choose. Allow parents to decide what is right for their own children to read.

Please note this is my personal opinion and may not reflect the views the owner or other reviewers here on Mundie Kids.
Posted by Kathy Habel at 1:05 PM Labels: Banned Books, Dr. Seuss, Random House Kids, The Lorax 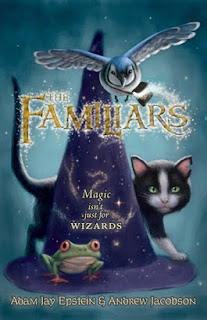