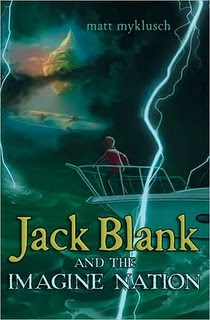 Jack Blank doesn't know who he is or where he comes from. He doesn't even know his real last name. All Jack knows is his bleak, dreary life at St. Barnaby's Home for the Hopeless, Abandoned, Forgotten and Lost. Everything changes one morning when Jack receives two visitors The first is a deadly robot, straight out of one of Jack's favorite comic books, that tries his best to blow him up. The second is an emissary from a secret country called the Imagine Nation, where all the fantastic and unbelievable things in our world orginate-including Jack. Jack soon discovers that he has an amazing ability-one that could make him the savior of the Imagine Nation and the world beyond, or the biggest threat they've ever faced (taken from the back of the ARC).

I rarely post the exact same review on both Mundie Moms & Mundie Kids, but sometimes I feel I need to make an exception, as is the case with Jack Blank And The Imagine Nation.

Jack Blank is such a brilliantly written book, with an amazing setting, wonderful characters and a lot of powerful messages written within it's pages. It's a place where all the super heros & real life heros I grew up with and even never before heard of heros, live. It makes the extraordinary seem ordinary.

Twelve year old Jack Blank has been living in a horrible orphanage, where he's constantly picked up on the bully Rex, and finds excitement in reading his comic books. Jack Blank has no idea where he came from, where his family is, and what his real last name is. On the morning a killer robot from one of Jack's comics becomes a reality and tries to kill him, Jazen Knight, an emissary from a secret country called Imagine Nation, has come for Jack. Jack soon finds himself in a place that is right out of his imagination. The way to get there is by believing.

Imagination Nation is in constant motion and travels between the countries of our world, though the members from this nation are from all over the world, make believe, real and from out of this world. I was really surprised that I loved Imagine Nation as much as I did. One of my favorite places in Imagine Nation is in Cognito. A city where people can go to, to "disappear", not even the streets have names. Imagine Nation is made of all sorts of living creatures from normal people to ninjas, kung fu masters, aliens, sorcerers, androids, regular people and more. It almost felt like it has a more updated Star Wars feel to it, complete with it's own Yoda in the form of one of my favorite characters, Stendeval, who's wisdom and encouragement help Jack find out who he is.

I really admired Jack's character. His life hasn't been easy and it gets tougher as soon as he arrives to Imagine Nation. He's been infected by a virus from a feared enemy, the Rustov, as known as Robie-Zombies, who all but destroyed many lives 12 years ago, in an invasion. Jack has few people who believe he's not a threat, Jenzen Knight and the wisest leader on Imagine Nation, Stendeval are two of them. I loved their characters. They convey such powerful messages not only to Jack, but to the reader.

Here's some of my favorite messages:

Jack Blank is out to prove he's not a threat, and it will take Jenzen, Blue, Stendeval, and Jack's new friends to help him in his quest. Jack alone must believe in who he is and what his powers can do. Jack has a power that has not only kept his infection at bay, but it can destroy the Rustov. When the evil Rustov robot comes back to kill Jack and reveals who he is, Jack will be faced with a decision that can ultimately change his future forever.

I know this book is written for grade and middle school aged kids, but I really enjoyed Jack Blank and The Imagine Nation. I was reminded of how much fun it is to imagine. I can't wait for son my to read this when he's a little older. Matt Myklusch writing it truly what kept me glued to the book. Jack Blank and The Imagine Nation is an awesome, action packed, must have book, with some great plot twists. I'm really looking forward to the next book in the series.

You can find out more about Jack Blank on Simon & Schuster's site here
http://tinyurl.com/2aegk5u 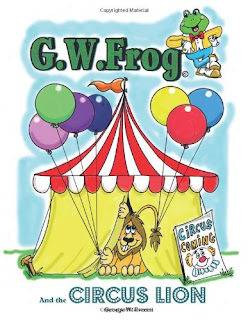 
Larry the Lion is distraught. His looks have changed over the years as he became an old lion. Losing his teeth was a big blow to his ego and inner courage. Along comes an unsuspected friend in the form of a very caring Frog. Along with some other critters from Frog Holler, and some creative genius, they fix up the old lion, restore his courage, and save the day!

I dismissed this book at first glance. It's been sitting by my desk for several weeks and I never took the time to read through it. The pictures are cute but there is a lot of text on the pages and I didn't think my daughter would like it. Another reminder to me to not judging a book before reading it.

Larry Lion is no longer the fierce lion he once was. He's lost all his teeth is no longer a fearsome sight. G.W. Frog and Gerald Grasshopper decide to help. This is a story that teaches that helping others can bring a smile to those we help and make us smile too.