Book Review-Rain Is Not My Indian Name 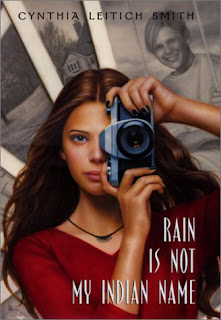 By Cynthia Leitich Smith
Published by Harper Collins Publishers
Released on July 1st, 2001
Source- The Author & Publisher
4 stars- A Great Read
The next day was my fourteenth birthday, and I'd never kissed a boy -- domestic style or French. Right then, I decided to get myself a teen life.

Cassidy Rain Berghoff didn't know that the very night she decided to get a life would be the night that Galen would lose his.

It's been six months since her best friend died, and up until now Rain has succeeded in shutting herself off from the world. But when controversy arises around her aunt Georgia's Indian Camp in their mostly white midwestern community, Rain decides to face the outside world again -- at least through the lens of her camera.

Hired by her town newspaper to photograph the campers, Rain soon finds that she has to decide how involved She wants to become in Indian Camp. Does she want to keep a professional distance from the intertribal community she belongs to? And just how willing is she to connect with the campers after her great loss?(quoted from Good Reads).
In a market full of wonderful Children's reads, I find a loss of wonderful contemporary Native American books, and really, Native American books for YA and Children as a whole. Cynthia Leitich Smith introduces us to a wonderful character, Cassidy, who's voice is one I think many adolescents will relate to on some level. She's real, dealing with all that life throws at her and trying to find her mark in the world and among her family and friends.
Cynthia tackles sensitive issues with grace and meaning, as Rain's story unfolds. Rain is dealing with the death of her best friend, the passing of her mother a few years before, her father being stationed over seas, a brother who she's drifted away from and living in a small town where everyone knows everything about each other, Native Americans are the minority. Through Rain's struggle to find her place in her American Indian Heritage, Cynthia gives us a real glimpse of what some Native American preteens and teens struggle with.
Through Rain's journey in learning to be proud of and embrace her beautiful heritage, Cynthia gives us her powerful message that we are all different and our uniqueness is what brings us, as a human race together. Rain Is Not My Indian Name is heartbreaking, real, thought provoking book, that will leave readers feeling empowered to embrace who they are.
Posted by Mundie Kids at 1:25 PM Labels: Book Review, Cynthia Leitich Smith, Harper Collins Childrens, Rain Is Not My Indian Name

Last week, Mundie Kids had a chance to participate in Savvy Source's "So What Should We Read" article. We are one of 5 contributors who shared what we think are the Top 10 Children's and Middle School books for 2010. You can find our list here http://tinyurl.com/2a5fkmr and here:

Jack Blank and The Imagine Nation by Matt Myklusch

The Incorrigible Children of Ashton Place, The Mysterious Howling by Maryrose Wood

The Familiars by Adam Jay Epstein and Andrew Jacobson

The Ladybug Girl Goes to the Beach by Jacky Davis

*Quoted off of Savvy Source and you can find each of these books reviews here on our blog by clicking on the book's title.*
Savvy Source was founded by Stacey Boyd as an online community helping parents by providing information on over 100,000 preschools throughout the United States. They also provide resource links on educational activities, reviews on kid-friendly products and local information on fun things to do in major U.S. cities. Take a look around Savvy Source's site; you will be amazed at the wealth of information that's there for parents.
Posted by Mundie Moms at 7:31 AM Labels: 2010 Top 10 Reads, Savy Source