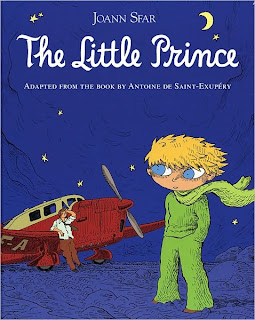 Illustrated by: Joann Sfar
Adapted from the Book by: Antione de Saint-Exupery
Published by: Houghton Mifflin Company
Released On: October 18, 2010
Ages: 10 and up
Source: netgalley
Rating: 4.5 stars - I really liked this book. Go pick it up.

Synopsis (from Houghton Mifflin's website): For over sixty-five years Antoine de Saint-Exupéry's The Little Prince has captured the hearts and minds of its readers. The whimsical story with a fairy tale touch has sold over 80 million copies in 230 languages. This exciting graphic adaptation features beautiful, new artwork by Joann Sfar. Hand-chosen by Saint-Exupéry's French publishers for his literary style and sensitivity to the original, Sfar has endeavored to recreate this beloved story, both honoring the original and stretching it to new heights. A vibrant, visual gift for longtime fans and those experiencing the story for the first time.

Joann Sfar is a "force of nature" according to FirstSecondBooks.com and he has produced over 100 graphic novels since the early 1990s. He's just the perfect illustrator for a beloved book like The Little Prince. I shared this book with my 11-year-old son and for me it was a wonderful way to re-live a much loved story from my tween years.

A classic story like The Little Prince takes on new meaning when you read it as an adult. You understand the subtle message of how we, as adults, need to hold on to those little magical pieces of childhood that make us still wonder at the world around us. Sfar's illustrations bring a freshness to the story and make it more modern and very accessible to this generation of young readers.

If you know a reluctant reader, I would highly recommend this book for them or for youself. So go on, sit down with a cup of tea and flip through this vividly illustrated graphic novel and remind yourself that we do need to look at the world through a child's eyes once again.
Posted by Sophie at 8:57 AM Labels: Book Review, Houghton Mifflin Company, Joann Sfar, netgalley, The Little Prince