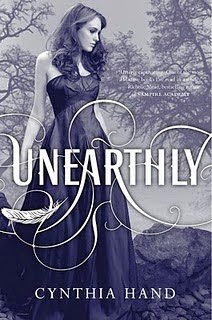 Clara Gardner has recently learned that she's part angel. Having angel blood run through her veins not only makes her smarter, stronger, and faster than humans (a word, she realizes, that no longer applies to her), but it means she has a purpose, something she was put on this earth to do. Figuring out what that is, though, isn't easy.

Her visions of a raging forest fire and an alluring stranger lead her to a new school in a new town. When she meets Christian, who turns out to be the boy of her dreams (literally), everything seems to fall into place—and out of place at the same time. Because there's another guy, Tucker, who appeals to Clara's less angelic side.

As Clara tries to find her way in a world she no longer understands, she encounters unseen dangers and choices she never thought she'd have to make—between honesty and deceit, love and duty, good and evil. When the fire from her vision finally ignites, will Clara be ready to face her destiny?

Unearthly is a moving tale of love and fate, and the struggle between following the rules and following your heart (quoted from Goodreads).

Every now and then I'll read a book that makes me savor every word on the page, and drink in every little detail about the setting and enjoy every moment of the plot. Cynthia Hand has done a brilliant job of doing just that with her debut book. Unearthly is a beautifully written story that merges it's unique Angel-lore with teenage reality. What I really liked about Cynthia's writtinh is how she patiently unravels bits and pieces of the plot and allows me to get to know her characters. At first I wanted the story to be rushed, but what I came to love about Unearthly is that it is not rushed or forceful, but well written and thought out.
I really enjoyed Clara's voice. She's someone who I felt was normal and a character who I felt really let me into her world. I felt apart of it and could relate to the awkwardness of being a teen and in high school. I'll admit, I envied her breathe taking view from her home. She's living in my dream state, surrounded by the things I miss doing. Okay, so maybe I become a little ( a lot) obsessed with the setting. Cynthia described WY and the out doors perfectly!! With the outdoors comes Tucker. Yes, he stole my heart! Tucker is a true outdoors man, rancher/rodeo guy, and a character I couldn't help but love. Not to mention I really love Wendy, Tucker's twin sister.
Tucker and Clara reminded me of how my husband and I were when we first met, in the way they both acted around each other. I loved how it wasn't love at first site with these two, and I really liked being able to watch their relationship really grow and bloom. It's such a beautiful love story and I think often times relationships can be too rushed in books. Clara and Tucker's story was beautiful written. That's not to say I don't like Christian. I know my heart is going to break for one of these guys, as Cynthia has written a wonderful love story. Tucker and Christian are complete opposites. Christian is the one we are first introduced to and the one I was originally rooting for (I can't say why, as it will give some of the plot away). He's the one all the girls fall over themselves for, but don't worry, he's not that full of himself. He's too nice and may be too good to be true.
The family dynamics were wonderful and I really liked the realism in Clara and her mother's relationship despite their "special" abilities. For me Unearthly is a 5 star book. Reading this was a breath of fresh air for. It's unique mythology, beautiful love story and it's perfectly added in twits and action left me feeling completely satisfied and wanting the next book. I highly recommend picking this book up!
Posted by Mundie Kids at 6:42 AM Labels: 5 stars, Cynthia Hand, Debut Author, Harper Teen, Unearthly