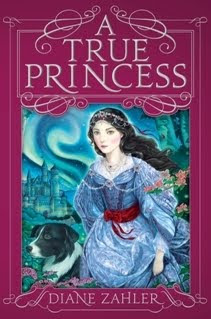 By Diane Zahler
Published by Harper Collins
Released on Feburary 1st, 2011
Source- Harper Collins
5 Stars- It's a Fantastic Read
Twelve-year-old Lilia is not a very good servant. In fact, she's terrible! She daydreams, she breaks dishes, and her cooking is awful. Still, she hardly deserves to be sold off to the mean-spirited miller and his family. Refusing to accept that dreadful fate, she decides to flee. With her best friend, Kai, and his sister, Karina, beside her, Lilia heads north to find the family she's never known. But danger awaits. . . .

As their quest leads the threesome through the mysterious and sinister Bitra Forest, they suddenly realize they are lost in the elves' domain. To Lilia's horror, Kai falls under an enchantment cast by the Elf King's beautiful daughter. The only way for Lilia to break the spell and save Kai is to find a jewel of ancient power that lies somewhere in the North Kingdoms. Yet the jewel will not be easy to find. The castle where it is hidden has been overrun with princess hopefuls trying to pass a magical test that will determine the prince's new bride. Lilia has only a few days to search every inch of the castle and find the jewel—or Kai will be lost to her forever (quoted from Goodreads)

I absolutely loved this retelling of Princess and the Pea and it's unique spin. A True Princess is a fantastic story with a fabulous main character who's strong, independent, fearless and one I think many readers will enjoy getting to know.
Lilia doesn't know much about where she came from, and in her dreams she has flashbacks of her life before she ended up on a farm. Found when she was a toddler by a kind farmer who had two younger children of his own, she grew up close to Kia and Karina and they formed a strong friendship and treated each other like siblings. The farmer's second wife loathes Lilia and instead of being sold as a slave, Lilia sets out to find the homeland she can't remember.
Lilia is a brave, protagonist who seeks adventure and a longing to find out who she really is and where she came from, and with Kia, Karina and their faithful dog, they set off in search of a Lilia's northern homeland. Their adventure is one mixed with lore that I absolutely love, along with loyal Knights, Odin & his hunters, Elves and the Elf King. Upon finding themselves lost in the Bitra Forrest, the group finds themselves in the dangerous territory of the Elf King, and soon find themselves racing against time to find a precious jewel that they can trade in exchange for Kia, who's fallen under the Elf King's daughter's spell.
I really enjoyed the royal family and the plot twist that is unraveled upon getting to know them. Each of the characters that surround Lilia are fantastic! I really enjoyed the beautiful setting, the plot and the way the characters are developed. I really came to admire Lilia's courage. She defiantly has the traits of a true princess, as she's intelligent, loyal, brave and is very confident as she stands up for what she feels is right, even if it puts her in harms way.
I completely fell in love with this story, as it's a wonderful retelling of a classic fairytale with wonderful twits. I thought it was very fitting that each chapter in the book is titled with A True Princess.. and then adds in something like, Does Not Steal, which sets the tone for what you'll find in the next chapter. I am really looking forward to reading this book with my little girl when she's older. It's one I highly recommend for younger fans who enjoy fairy tales, fantasy and adventures with unforgettable characters.
Posted by Mundie Kids at 9:24 AM Labels: 5 stars, A True Princess, Book Review, Diane Zahler, Harper Collins Childrens