I've slacked off big time lately on posting books I've received for review, bought or were gifted. On Mundie Moms we participate in a weekly meme, called In My Mailbox, and at first I thought it would be fun to add that meme to MK's as well, but I've since decided to not continue with it on here.
Instead I'd like to do a more laid back post that will feature some of the books we've recently received, that will be featured on our blog in the coming week. Here is this week's Weekly Feature- 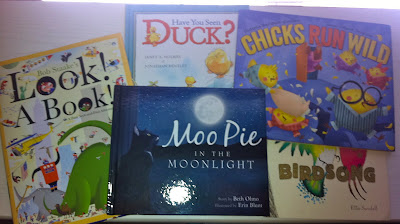 * Moo Pie In the Moonlight by Beth Olmo & illustrated by Erin Blunt
* Bob Staake's Look! A Book! A Zany Seek and find Adventure
* Have You Seen Duck by Janet A. Holmes & Illustrated by Jonathan Bentley
* Bird's Song by Ellie Sandall
* Chicks Run Wild by Sudipta Bardhan-Quallen & illustrated by Ward Jenkins (which I featured a week or so ago on the site).
These books will be featured on the blog via review this coming week.
Posted by Mundie Kids at 12:21 PM Labels: Mundie Kids Weekly Feature 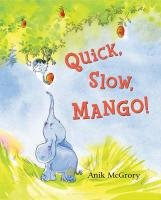 By Anik McGrory
Illustrated by Anik McGrory
Published by Bloomsbury Children's Books
Released on January 4th, 2011
Source- Bloomsbury
3 stars- It's A Good Read
The star of Anik McGrory's critically acclaimed Kidogo returns in a stand-alone story about delicious mangoes, silly monkeys, and taking one's own sweet time. Baby elephant Kidogo is off with his Mama to find breakfast. Kidogo loves to take his time, and wants to do everything slowly, slowly—even though Mama wants to move quickly. Meanwhile, up in the trees, a mischievous monkey named Polé Polé is always in a hurry, trying to grab all the mangoes he can. Fast and slow, these two adorable critters meet up in the luckiest way—and it's mangoes for breakfast for everyone!
Quick, Slow, Mango! is about friendship, as Pole Pole the monkey and Kidogo the elephant meet up in a most unexpected way. PolePole is always in a hurry and Kidogo enjoys taking his time and together these two friends learn that sometimes it's okay to go slow and sometimes it's okay to be fast.
The fun, bright illustrations really add a lot to this fun story! I think it's one that toddlers and early elementary school aged kids will enjoy.
Posted by Mundie Kids at 10:42 AM Labels: 3 stars, Anik McGrory, Bloomsbury Children's Publishing, Book Review, Quick Slow Mango