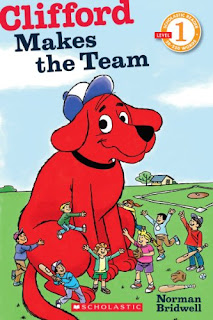 It only takes a little to BE BIG!

Clifford wants to play baseball with the kids, so he tries to find a bat his size: a tree, a utility pole, a pipe . . . nothing works, but in the end, the kids find a way to include Clifford in their fun!

The BE BIG campaign invites everyone, big and small, to take action and raise awareness for how CLIFFORD'S BIG IDEAS can make the world a better place.

Be a Good Friend * Share * Be Kind * Help Others * Be Truthful * Have Respect * Be Responsible * Play Fair * Work Together * Believe in Yourself (quoted from Goodreads).

Clifford wants to play baseball and when he can't find a bat to use, he starts to cry, as he wants to join the game. Not ones to let Clifford feel bad, the kids invite him to play in a fun game of baseball. I love beginning readers, especially when the stories not only capture my children's attentions, but they involve characters they know. Clifford's story is a fun, engaging story for both beginning readers and one that toddlers can enjoy.
Posted by Mundie Kids at 7:59 AM Labels: 4 stars, Book Review, Cartwheel Books, Clifford Makes The Team, Norman Bridwell, Scholastic, Scholastic Reader Level 1 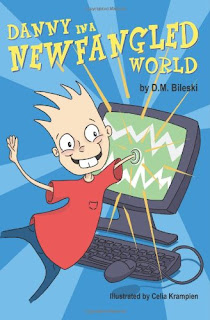 By D.M. Bileski
Illustrated by Celia Krampien
Published by Cumulus Press
Source- book from the author for review
Ages 6-10
3.5 stars- It's A Good Read
Ten year old Danny Lenesky can't think of anything more fun in the whole world than playing on his computer. That is, until he gets sucked right into it and lands smack in the middle of a video game! A thrilling cyber-adventure tale for six to ten year olds (quoted from Goodreads).
Young Danny loves playing on his computer, in fact it's all he ever wants to do until one day he gets sucked into his computer. Danny loves to play games and he never wants to do anything else but play on his computer. He forgets that there's more important things for him to be doing, and that there's nothing wrong with playing on his computer as long as it's done in moderation.
Danny's adventures in his computer will help readers realize the harm that can come from spending so much time in the virtual world. Readers will like getting to know Danny, as he's someone they will be able to relate to and his story is a great reminder of how easy it is to get sucked into the virtual world. Like Danny, readers will learn that the virtual world isn't always as fun as they think it is.
Posted by Mundie Kids at 1:24 AM Labels: 3.5 stars, Book Review, Celia Krampien, D.M. Dileski, Danny in a Newfangled World