Book Review- Take Me To The River 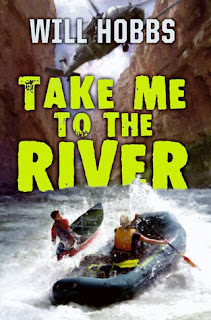 By Will Hobbs
Published by Harper Collins Childrens
Released on March 1st, 2011
Ages- 10 & up
Source- ARC from publisher for review
3 stars- It's a Good Read
Fourteen-year old Dylan Sands has come all the way from North Carolina to Big Bend National Park, on the Texas/Mexico border, to paddle the fabled Rio Grande. His partner in adventure is a local river rat, his cousin Rio. As they’re packing their boats for ten days in the canyons, six Black Hawk helicopters appear overhead and race across the river into Mexico.

None of their previous river experience can prepare them for the approach of a deadly hurricane and a Mexican gangster who’s carting a kidnapped child in tow. In order to make it out of the canyons alive, Dylan and Rio will have to find a way to get both themselves and the child away from the fugitive, all while navigating the wildest waters of the Southwest (quoted from Goodreads).
Take Me To The River is a book that is full of adventure, danger and one that will capture the attention of it's readers. Will Hobbs's vivid detail of the real life dangers along the US/Mexican border, a deadly hurricane, wild rapids, along with the dangers of not only being in the middle of a desert, but also throw in a kidnapping and coming face to face with one of Mexico's most wanted gave the story some heart pounding, adrenaline rushing moments.
I personally am a little torn on this review. Middle grade wise, it's a great adventure book, but the mom side of me had problems with the lack of parents in the story. I found it hard to digest that in our day in age (which the story is set) anyone would let, at least I hope not, a 14 yr old hitch hike 80 miles, let alone allow two young teenagers to set off on a 10 day canoe trip, especially along a dangerous stretch of land.
Take Me To The River is a truly an adventure story, and Will has a talent for story telling as he blurs the lines between fiction and reality well. This is definitely a book that I would recommend talking to readers about, making sure they understand that the things that were done in this story are not things that are necessarily safe or encouraged in real life. This is a book I would recommend, and I think reluctant readers and boys in 5th grade and up will enjoy.
Posted by Mundie Kids at 7:44 PM Labels: 3 stars, Book Review, Take Me To The River, Will Hobbs 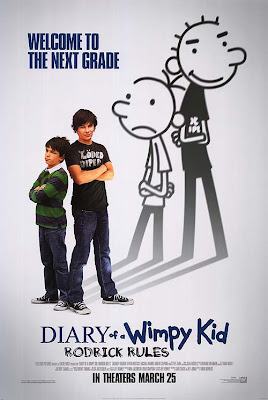 If you're a fan of Diary of a Wimpy Kid, you don't want to miss the newest movie, DIARY OF A WIMPY KID 2: RODRICK RULES opening in theaters nationwide on March 25, TOMORROW!!
From FOX-
SYNOPSIS:
In this sequel to 2010’s surprise hit, Greg Heffley, the kid who made “wimpy” cool is back in an all-new family comedy based on the best-selling follow-up novel by Jeff Kinney. (Kinney’s Wimpy Kid” series has thus far sold 42 million books.) As he begins seventh grade, Greg and his older brother – and chief tormentor – Rodrick must deal with their parents’ misguided attempts to have them bond.
POSTER: http://pr.mammothnyc.com/DiaryOfAWimpyKid/poster.jpg.zip
OFFICIAL SITE: www.diaryofawimpykidmovie.com
Visit the Wimpy Wonderland Island on Poptropica! Join Greg, Rowley, Rodrick and the rest of the Wimpy Kid characters for a snow-capped adventure. Help find Greg's little brother Manny before the rotten Whirley Street kids do.
Play the game now at: http://www.poptropica.com/
WIMP YOURSELF
It's time to get Wimpy!
Join the two million wimps who have created and shared their own wimpy characters on the newly relaunched site www.Wimpyourself.com. Wimp Yourself today!
RODRICK'S BAND CHALLENGE:
Calling all bands!!!
Rodrick and his band Loded Diaper are challenging YOU to a Rock Duel! To accept the challenge, simply post a video response to Rodrick's Band Challenge video. Grab your band, friends or big brother and give it your best shot. The winner, as selected by Loded Diper will receive a special copy of the "Rodrick Rules" book, signed by Jeff Kinney.
Enter by March 25th at: http://www.youtube.com/watch?v=p0acfnipdO0
Posted by Mundie Kids at 4:16 PM Labels: Diary of a Wimpy Kid, Diary of Wimpy Kid Rodrick Rules Movie, Fox 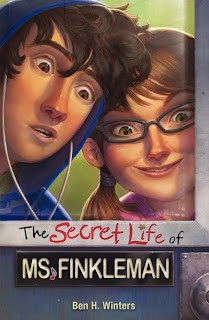 Recently we had the chance to interview Ben Winters about his middle grade book The Secret Life of Ms Finkleman. You can read my 5 star review of his book here.
I totally felt like I was back in middle school while I read The Secret Life of Ms Fkinkleman. What inspired your book?
Well, thank you! There were two main sources of inspiration for The Secret Life of Ms. Finkleman. The first was my middle-school and high-school days, when I played in a number of bands. It was a really important time in my life, and one I think back on often, and I've always wanted to write about the incredible feeling of being a kid in a band, the power of writing songs and performing. The other source of inspiration was my time as a creative-writing teacher in some schools in Manhattan -- I was always intrigued by how fascinated kids are with the private, non-teacher lives of their teachers. Whenever a teacher mentions their own children, or their spouse, or their past, you ca see the kids perk up and kind of go, "Wait...Mr. So-and-So is an actual human being? With a life outside this school?" So I thought it would be cool to find out what happens when a student decides to dig up some dirt of one of the more enigmatic teachers.
Which of your characters would you have been friends with in middle school and why?
Ha! Most likely, I would have been friends with Tenny, because I, too, was really, really into rock music, and I definitely sat around in classes thinking up band names. But my friends and I were probably a bit more tuned in to the whole schoolwork thing than Tenny is.
I really loved the pairing of Bethseda and Tenny. What inspired their characters?
Tenny definitely owes something to certain of my pals, and even myself, in those years. Bethesda, too, has something of me in her -- the eagerness to know everything, the whole issue of "wanting to do well in school" vs. "not wanting to be perceived as a know-it-all." In forcing these two very different kids into a team-up situation, I'm hoping to suggest to my readers, as gently as possible, that it's OK to be friends with people who seem totally different than you.
What was your favorite subject in middle school? Why?
English. I just love books and writing. Always have. I'm not one of those people who always excelled science and then randomly started writing later on. I have always loved to write, and have never understood science at all. (Sorry, Mr. Lynch.)
What was one of your favorite middle grade books you'd recommend to our followers?
I would recommend Norton Juster's The Phantom Tollbooth to middle-grade readers, their older brothers and sisters, and their parents, too. I can't think of another book I have loved as thoroughly, or for as long.
Thank you so much for joining us today Ben.