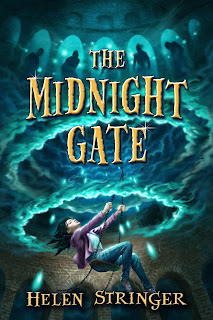 I am really excited to have Helen Stringer on Mundie Kids today, to do a guest post. She has a fabulous new release called The Midnight Gate, which is the second book in her Spellbinder series.
Here's a little bit about The Midnight Gate:
It’s been two months since Belladonna Johnson discovered she was the Spellbinder, and she’s full of questions about her powers. When a ghost finds Belladonna and her classmate, Steve, and gives them a mysterious map, the friends don’t know if they should be looking for or hiding from the one person who holds the answers to Belladonna’s powers: the Queen of the Abyss. Throw into the mix that Belladonna’s parents, who are ghosts, have disappeared and that her brand-new and maybe even sinister foster family seems to know more than they’ll let on, and you have a sequel made of high adventure and intrigue, seasoned with affecting characters and topped with a dollop of wit.

The other day my mother was reading in the living room when she looked up and said, “I’ve just found a word I’ve never heard before.” She sounded vaguely surprised and rather pleased.

It’s an understandable response, if only because the older we get the fewer things surprise us, particularly words. After all, we’ve used them all our life – from those first barely formed cries to the umpteenth attempt to get through all of Proust, only to give up and see what’s on TV, where we are presented with yet more words. Even though we may know that the average person’s vocabulary clocks in at around 20,000 words and a highly educated person at around 35,000, the fact that Shakespeare used over 66,000 in his lifetime can only mean that there are a whole heck of a lot of words that none of us is ever going stumble across.

When I was young, I used to love finding new words. I really liked it when I read a book and discovered one I didn’t know – and the longer the better. Often I could deduce what a word meant by the context of the sentence, but the best words sent me scrambling for the dictionary.

All of which goes some way towards explaining my amazement when some (adult) reviewers of Spellbinder got all huffy because there were one or two words they hadn’t heard before. Now, I would be the first to agree that just arbitrarily using obscure words when there are perfectly functional ones that are more familiar is the worst kind of affectation, but that wasn’t the case at all. The English language has so many words in it that it is possible to say exactly what you mean, so why should we settle for ones that just approximate that meaning? (By the way, this vast treasure trove of words also means that with a little effort it is possible to insult people with really spectacular precision. Heh heh.)

Of course, it’s one thing to object to words that you don’t understand but quite another to project your objection onto other readers. If an adult finds it annoying to come across a word that they don’t know, it doesn’t follow at all that the intended middle grade reader will feel the same way. The younger the reader, the more they are used to finding new words. This is how we build our vocabularies in the first place.

Words should be fun and the more fun they are when you are young, the better. The writers who make up words from whole cloth, such as Lewis Carroll, only increase the joy and with it the realization that our language is malleable and ever-changing. There are words that have completely different meanings today than those they had a few hundred years back (“nice” is a good example of that), brand new ones coined to address a changing world (“website,” “rotoscope”) and words that were created just for the sheer heck of it (“brillig,” “vorpal”). The English language isn’t a cage or a treadmill, it’s a toy, so come on…let’s play!

Oh, and the word my mother had never come across? “Threnody.”

______________________________
For excerpts, games, links, and more, visit Helen's website at: http://www.helenstringer.net/
Read Helen's blog: http://helenstringer.net/blog/
Be sure to visit the next stop in the blog tour, Poisoned Rationality at http://www.prationality.com/.
We also have an awesome GIVEAWAY!!!
Spellbinder series giveaway! Three lucky winners will receive one copy each of THE MIDNIGHT GATE and SPELLBINDER along with some bookmarks! To enter, send an e-mail to SpellbinderSeries@gmail.com. In the body of the e-mail, include your name, mailing address, and e-mail address (if you're under 13, submit a parent's name and e-mail address). One entry per person and prizes will only be shipped to US or Canadian addresses. Entries must be received by midnight (PDT) on 6/17/11. Winners will be selected in a random drawing on 6/18/11 and notified via email.
Posted by Mundie Kids at 11:18 AM Labels: Author Guest Post, Feiwel and Friends, Helen Stringer, Mundie Kids Blog Tour, Spellbinder, The Midnight Gate