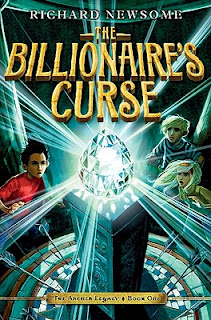 Gerald Wilkins never considered himself a particularly exceptional thirteen-year-old. But that was before he inherited twenty billion pounds, a Caribbean island, a yacht, and three estates from a great-aunt he never knew. With this fortune, however, comes a letter. One from his great-aunt Geraldine. One that tells Gerald that she was murdered, and that it's up to him to find out why.

Along with his friends Ruby and Sam, Gerald embarks on a journey that will lead him from the British Museum to dodgy social clubs for the disgustingly rich to mansions in the English countryside to secret places far underground. Who was Geraldine Archer? And what secrets was she hiding? Unless Gerald, Sam, and Ruby can find out before the killer does, they may be next.

An exciting read with a who done it, The Billionaire's Curse will engage young readers who love a fun, thrilling adventure. Thirteen year old Gerald Wilkins's world is turned upside down when he's jetted off from his home in Australia to attend the funeral of his late great aunt in England, a billionaire who's left her fortune to him. To make matters worse Gerald's greedy parents up and leave him for a get away in the tropics, he's started to receive death threats and he receives a letter from his late Great Aunt saying she's been murdered. With no one to trust and a mystery to solve, Gerald sets off on an adventure of a life time.
Gerald is a down to earth character who befriends Sam and Rudy, two kids who save him from one of many bad guys who are after him. Together the three are determined to solve the mystery behind his Great Aunt's death, and the ties to the stolen diamond and uncover his Great Aunt's secrets. What I loved about the adventure were the settings, which included the English country side, the British Museum, distinguished British mansion and some elite social clubs. Each place held more twists and clues, and the most surprising place was the secret under ground crypt who's clues will lead the young heros on their next adventure.
Gerald, Sam and Rudy are character's kids will love reading about and will be able to relate to them on some level. This is a story full of heart pounding action, a lot of mystery and a story about friendship. There are a couple brief action scenes that may be a little graphic for young readers. I think this is a book that readers 9 years old and older will really enjoy. I'm looking forward to finding out what's in store for Gerald and his friends in the sequel, The Emerald Casket.
Posted by Mundie Kids at 9:24 AM Labels: 4.5 stars, Book Review, Richard Newsome, The Archer Legacy, The Billionaire's Curse, The Billionaire's Curse Series, Walden Pond Press