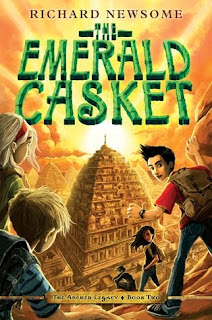 By Richard Newsome
Published by Walden Pond Press
Released on May 17th, 2011
Ages 9-13
Source- ARC from publisher for review
2nd book in The Archer Legacy
4.5 stars- A Fabulous Sequel
It has only been a month since Gerald Wilkins be-came the richest kid on earth. One month since he found out his great-aunt Geraldine had left him all her fortune and, with it, a murder mystery, clues to a diamond heist, and a target on his back. One month since Sir Mason Green made off with the contents of the diamond casket, an object of unspeakable power. And you thought your school vacation was eventful.

As book two of the Archer Legacy opens, Gerald, Ruby, and Sam come upon papers, drawings, and reams of research, all indicating that Gerald's family has been protecting a secret concerning nothing less than the fate of the world. Now Gerald and his friends are off to India to try to find out the truth. Friendships will be forged and broken. A city buried under the sea will be rediscovered. A whole mess of pigeons will be involved. And Gerald is going to have to make a choice between his love for his friends and the darkest desires of his heart.

It's entirely possible that this month might be even more eventful than the last.

Picking up right where The Billionaire's Curse ends, Gerald and his friends, siblings Rudy and Sam, find themselves in the middle of more heart pounding action, deadly twists, and more mystery as they try and uncover more clues to his Great Aunt's death and his family secrets. This times their adventure takes them to India, and what a trip it is. You don't even need to leave the comforts of home to feel like you've just gone on a first class trip with Gerald and his friends.

India offers a lot of fun, and adventure for the characters and readers alike. The action is engaging and I felt realistic for the story. One of the things that I enjoyed about this sequel was getting to know the characters more indepth. I've come to love each of the teens in their own ways. Each character offers a lot to the story and together they make a fabulous team of detectives. Their friendship and trust in each other is not only well written but it's relatable. Their interactions and humor together really bring the story to life and I think it's something that young readers will really enjoy. I also like the way Richard has written his adult characters, as I've come to love some of them and have my suspicions about others. I'm interested in finding out more about them in the next book.

With many more twists, adventure and mystery, The Emerald Casket is a fabulous sequel that leaves me wondering what lies in store for Gerald and his friends in France. This is an exciting series and one I'd recommend picking up. It's the perfect summer read. 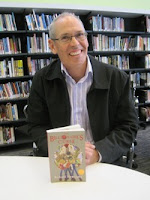 I am really excited to have Middle Grade author, Richard Newsome with us today. Richard is the author of The Archer Legacy. His sequel The Emerald Casket will be released later this summer.
How would you describe your series in three words or less?
Epic murder-mystery romp.
Your hero is a thirteen year old boy who suddenly finds himself the richest kid in the world. What is one thing you would have purchased at 13 if you found yourself the richest kid?
It would have to be a bike, tricked-up with the latest of everything. The kid next door had an amazing dragster, that he loved more than anything else in the world. Every cent of pocket money went into detailing that thing until it vibrated when the sun hit it. Kids would line up just to have a ride on it. It was a thing of beauty and I wanted desperately to have one just like it.
You have a wonderful adventure wrapped into a murder mystery. What sort of adventure books did you enjoy reading growing up?
I was heavily into a series called THE THREE INVESTIGATORS. The investigators were Jupiter Jones, Pete Crenshaw and Bob Andrews, and they'd spend their days solving mysteries around the Hollywood canyons. A bunch of us at school would swap around the latest editions and I'd haunt second hand bookstores trying to find old versions. I also loved Agatha Christie murders -- the whole super stylised Britishness of her books really appealed to me.
I love that you incorporate places all over the world on Gerald's journey. What kind of research did you do for your story?
My first job out of high school was as a cadet reporter on our local newspaper, so I've always had a newshound approach to my writing. I really need to see and explore a place before adequately describing it. The first volume in the Archer Legacy series is THE BILLIONAIRE'S CURSE, and most of the action takes place in England. So I spent a few weeks exploring locations in London and Glastonbury in the south-west to find just the right settings for the action. The second volume is THE EMERALD CASKET and that's set in India, so it was off for two weeks around India, scouting for ideas and locations. At one point in the story I had to get my three heroes from Delhi in the north to a tiny fishing village in the south, and the best way is via train. So I booked a ticket on the Tamil Nadhu Express for a 43-hour journey in an un-airconditioned carriage down the spine of India. It was an experience!
Who would you have been friends with as a teen, Gerald, Sam or Ruby and why?
I'd like to say Ruby, because she's such a vibrant go get 'em type of person. You get the feeing that life around Ruby would never be dull. But I think she would have intimidated me into a tongue-tied wreck. So I guess it would be Sam. He's such a loveable doofus, that you know no matter how bad things get, he'd be there to support you.
What is one of your favorite books or series from growing up?
From a very young age, I loved YERTLE THE TURTLE by Dr Seuss. It is such a powerful story of democracy and the basic rights of all beings to equality and a life free from tyranny. It is extraordinary how much is packed into a few pages about some turtles in a pond. My voice still catches when I read it today. There was also a series by an Australian author, S.A. Wakefield, about the BOTTERSNIKES AND GUMBLES, about some mythical creatures in the Australian bush -- it is hilarious. And my latent Anglophilia can be traced to the WILLIAM books by Richmal Crompton, which describe the type of life every boy should lead; namely, endless mischief, tree climbing and trouble with grown-ups.
__________________________________________
Thank you Richard for being with us today! Thank you to Walden Pond Press for making this interview possible.
You can read my review for The Billionaire's Curse here.
Be sure to visit Richard on his site here, follow him on twitter, facebook, goodreads, and go HERE to purchase his books.
Posted by Mundie Kids at 7:45 AM Labels: Mundie Kids Author Interview, Richard Newsome, The Archer Legacy