I am so excited to share our exclusive sneak peak we have for Walden Pond Press's upcoming middle grade release, BREADCRUMBS. This a fabulous story! Here's a little bit about it: 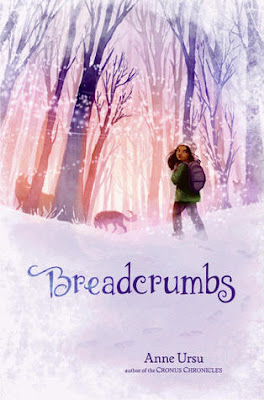 By Anne Ursu
Illustrated by Erin McGuire
Published by Walden Pond Press
To Be Released on September 27th, 2011

Once upon a time, Hazel and Jack were best friends. But that was before he stopped talking to her and disappeared into a forest with a mysterious woman made of ice. Now it's up to Hazel to go in after him. Inspired by Hans Christian Andersen's "The Snow Queen," Breadcrumbs is a story of the struggle to hold on, and the things we leave behind. 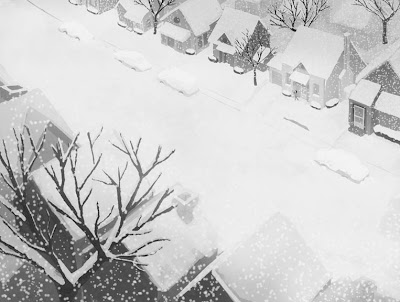 It snowed right before Jack stopped talking to Hazel, fluffy white flakes big enough to show their crystal architecture, like perfect geometric poems. It was the sort of snow that transforms the world around it into a different kind of place. You know what it’s like—when you wake up to find everything white and soft and quiet, when you run outside and your breath suddenly appears before you in a smoky poof, when you wonder for a moment if the world in which you woke up is not the same one that you went to bed in the night before. Things like that happen, at least in the stories you read. It was the sort of snowfall that, if there were any magic to be had in the world, would make it come out.
And magic did come out.
But not the kind you were expecting.
That morning, Hazel Anderson ran out of her small house in her white socks and green thermal pajamas. She leapt over the threshold of the house onto the front stoop where she stood, ignoring the snow biting at her ankles, to take in the white street. Everything was pristine. No cars had yet left their tracks to sully the road. The small squares of lawn that lay in front of each of the houses like perfectly aligned placemats seemed to stretch beyond the boundaries of their chain-link fences joined together as one great field of white. A thick blanket of snow covered each roof as if to warm and protect the house underneath.
All was quiet. The sun was just beginning to peek out over the horizon. The air smelled crisp and expectant. Snowflakes danced in the awakening sky, touching down softly on Hazel’s long black hair.
Hazel sucked in her breath involuntarily, bringing in a blast of cold.
Something stirred inside her, some urge to plunge into the new white world and see what it had to offer. It was like she’d walked out of a dusty old wardrobe and found Narnia.
Hazel stuck her index finger out into the sky. A snowflake accepted her invitation and she felt a momentary pinprick of cold on the pad of her bare finger. She gazed at the snowflake, considering its delicate structure. Inside it was another universe, and maybe if she figured out the right way to ask, someone would let her in.
Posted by Mundie Kids at 10:22 AM Labels: Anne Urus, BREADCRUMBS, Walden Pond Press